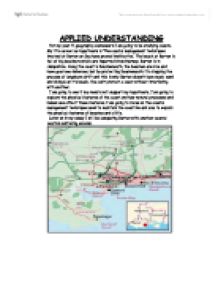 APPLIED UNDERSTANDING For my year 11 geography coursework I am going to be studying coasts. My title as well as hypothesis is 'The coastal management techniques involved at Barton on Sea have proved ineffective'. The beach at Barton is full of big boulders which are imported from Norway. Barton is in Hampshire. Along the coast is Bournemouth, the beaches are nice and have good sea defences, but by protecting Bournemouth it's stopping the process of longshore drift and this is why Barton doesn't have much sand and shingle on it's beach. You can't protect a coast without interfering with another. I am going to see if my results will support my hypothesis. I am going to explore the physical features of the coast and how natural processes and human use affect those features. I am going to focus on the coastal management techniques used to maintain the coastline and also to explain the physical features of beaches and cliffs. Later on in my essay I will be comparing Barton with another coastal location suffering erosion. THE THEORY COASTS - COASTAL PROCESSES AND LAND FORMS A coast is where the land meets the sea and the coast is eroded by destructive waves. These waves shape the cliffs as we see them now. Waves sometimes result in submarine earth movements, but are usually formed by the wind blowing over the sea. The fetch is the distance of open water which the wind can blow to create waves. ...read more.

The swash, which picks up sand and shingle travels up the beach in the same direction of the breaking wave. When this water returns down the beach to the sea, it is called backwash. The result is that material is transported along the beach in a zig-zag movement. This movement of beach material is called longshore drift. DEPOSITION Deposition occurs in sheltered areas where the build up of sand or shingle is greater than its removal. The most widespread coastal deposition feature is the beach. Although rocky beaches are formed by erosion (wave cut platforms, sand and shingle beaches result from deposition BEACH AND SPIT A spit is an area of sand or shingle which either extends at a gentle angle out to sea or which grows across a river estuary. Many spits are characterised by a hooked, or curved end. Spits only develop in places where: > longshore drift moves large amount of material along the beach. > There is a sudden change in the direction of the coastline. > The sea is relatively shallow and becomes progressively more sheltered. GLOSSARY OF COASTS - KEY TERMS COASTAL PROCESSES EROSION - Waves hitting cliffs and resulting in a part of the cliff breaking off, being slowly eroded. HYDRAULIC ACTION - is the process of coastal erosion caused by the force of the waves. CORRASION - process of erosion by waves hurling beach material against a cliff. CORROSION - process of erosion caused by certain acids in the sea slowly dissolving the cliff. ...read more.

Other coastal management techniques that can be used can be used are beach replenishment, sea walls or rock armour. BARTON ON SEA Barton on sea is a pleasant seaside area with wonderful views of the Solent and the Isle of Wight, surrounded by a pleasant residential area. This is why many old people decide to live there. It is in addition an area of particular scientific interest. The history of Barton can be traced back some 35 million years, to a period when crocodile type creatures roamed the area. This is confirmed by evidence unearthed by the constant erosion of the cliff face and analysed by geological scientists. Barton is better known by geologists for its fossils. Due to the never-ending cliff erosion, it is not possible to walk along the Barton cliff-top towards highlife in the west, and although it may be possible to walk to high cliff along the beach, but is not recommended due to the continuing cliff collapse. The geology at Barton is sand and clay. Clay is soft rock and is easily eroded by waves, When it rains, water soaks down through the sand above the layer of clay. The bottom layer of sand becomes saturated and moves, causing landslides and slumping. I have chosen Barton on sea to study coasts because it is under threat by the Atlantic ocean. The combining south-westerly prevailing winds and the distance that the wave travels will cause viscous destructive waves and will destroy Barton's cliffs. I am now going Barton to test my hypothesis and see if my predictions are correct, if Barton's coastal management techniques are effective. ...read more.