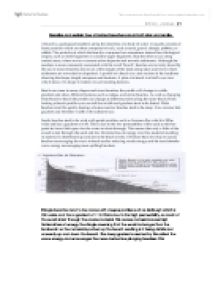 Describe and explain how attached beaches vary in both plan and profile. A beach is a geological landform along the shoreline of a body of water. It usually consists of loose particles which are often composed of rock, such as sand, gravel, shingle, pebbles, or cobble. The particles of which the beach is composed can sometimes instead have biological origins, such as shell fragments or coralline algae fragments. Beaches often occur along coastal areas, where wave or current action deposits and reworks sediments. Although the seashore is most commonly associated with the word "beach", beaches are not only found by the sea or ocean: beaches also occur at the margin of the land along lakes and rivers where sediments are reworked or deposited. A profile of a beach is a cross section of the landform showing the shape, length, steepness and features. A plan of a beach is a bird's eye view which shows it's shape in relation to surrounding features. ...read more.

The steep gradients created by this reflect the wave energy and encourages the more destructive plunging breakers. This encourages berms to develop at the point where the wave is at highest energy resulting in storm beaches and high tide ridges. As well as the sediment having a role of shaping beaches, the dominant wave type can also influence the beach profile. Constructive waves, which are swell wave from a long fetch, are long, low in relation to length and relatively infrequent with 6-8 arriving in a minute. These types of waves are commonly found on low gradient beaches and tend to break near the shore and as they have travelled across such a large distance the energy of the waves is dissipated allowing the sediment to remain on the beach. Whereas destructive wave, which are local storm waves with a short fetch, are short, high in relation to length and are more frequent with 10-12 arriving in a minute. ...read more.

With no erosion there was no new sediment being added and longshore drift continuing, beach levels decreased. Beach plans can tell how beaches are shaped and are maintained by the view from above. There are 3 main shapes a beach can take. Swash aligned beaches are beaches where waves are refracted between headlands and approach the shore at right angles, with wave crests parallel to the beach. The dominant movement of material is up beach, swash, and back down the beach, backwash. This creates stable features and although the profile may change due to changes in the sweep zone processes, the plan alters very little as there is no appreciable net gain or loss of material. Drift aligned beaches are where wave approach the coast at an angle. Longshore movements of sediment build out the beach to ensure that the optimum angle for sediment movement is achieved (40�-50�). Sediment is added at the same rate that longshore drift is happening so that no material is lost. ?? ?? ?? ?? Chris James | 1 ...read more.