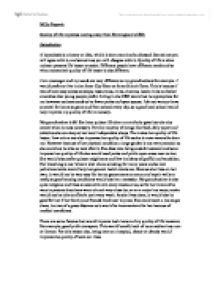 Because of the distance from these areas to the CBD, land is cheaper here. Recently small modern industries and large shops have developed here. Birmingham is the second largest city in England.

Introduction A hypothesis is a theory or idea, which is then examined and tested. Sometimes you will agree with it, and sometimes you will disagree with it. Quality of life is what makes a persons life better or easier. Different people have different needs and so what makes their quality of life better is also different. I am a teenager and my needs are very different to my grandmothers for example. I would prefer to live in the Inner City Zone or Inner Suburb Zone. This is because I would have easy access to shops, restaurants, clubs, cinemas, heath clubs and other amenities that young people prefer. Living in the CBD would not be appropriate for me however as there tends to be fewer parks and open spaces. I do not want to have to travel for hours to get to and from school every day, so a good local school would help improve my quality of life immensely. My grandmother is 69. She has a quieter life than me and only goes into the city centre when is most necessary. For the majority of things like food, daily paper and toiletries she can shop at her local independent shops. The makes her quality of life better. Low crime rate also improves her quality of life as she is more venerable than me. However because of her physical condition a large garden is not very practical as she could not be able to look after it. ...read more.

This zone is just outside the CBD, and old industry. In the last century factories have been built but the majority of these factories have been closed down as industry moved away from the CBD. The small terraced houses that were originally built for the factory workers are, in most cities and Birmingham still there. At this time however, land was expensive and so gardens and houses were small. Some of these houses have been knocked down and made into apartments or high-rise flats. This has helped encourage business workers to move to the CBS. The majority of these workers have large amounts of money, no children and that enjoy a good night life! This has encouraged bars, restaurants and clubs to open in the centre of most major cities. However it has also encouraged drug use and high crime rates. Moving outward from the CBD, the next zone is the Inner City. In the last century this land would also be used for factory building, however with modernisation, of these cities, industry has moved away and the old buildings converted. The majority of land is used as residential and most houses are terraced. Like the CBD, land was, and is, quite expensive in these areas and so most of the houses and gardens were small. The next major zone is the Inner Suburbs. This land is almost all residential. ...read more.

Urban growth is there for a process of expansion of land uses. For this study I am going to be following a transect along the Alcester Road, A435. This road is an A type road and runs from the centre of town to the outskirts in a southern direction. Because of the size pf Birmingham, if the hypotenuse is correct it will most likely apply to the majority of large towns and cities in England. My chosen areas of study are: * Balsall Heath * Kings Heath * Alcester Lanes End * Druids Heath Balsall Heath Balsall Heath is situated in the Inner city zone of Birmingham. From the centre of the CBD it is 2.75 kilometres. It has been calculated that 4,000 people out of Balsall Heath's population of 12,000 regularly participate in a caring activity designed to improve the quality of life of the neighbourhood. Kings Heath Kings Heath is in the Inner suburb zone of Birmingham. From the centre of the CBD, Kings Heath is 5.5kilometres. According to the 2001 Population Census there were 24,273 people resident in Kings Heath. Alcester Lanes End Alcester Lanes End is situated in the Outer suburb zone of Birmingham. From the CBD, Alcester Lances End is 6.25 kilometres. Druids Heath Druids Heath is an area situated on an Outer City Council Estate. From the CBD, Druids Heath is 8 kilometres away. This is the area furthest away form the CBD that I will be studying. ?? ?? ?? ?? Millie Popovic Quality of life improves moving away from Birmingham's CBD. ...read more.