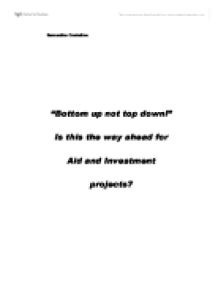 &quot;Bottom up not top down!&quot; Is this the way ahead for Aid and Investment projects?

Samantha Costelloe "Bottom up not top down!" Is this the way ahead for Aid and Investment projects? Contents 1 Abstract. 2 Introduction 3 Differences between Aid and investment. 4 Definition of terms 5 Types of Aid. 6 Case study- the Hertzog agricultural cooperative, South Africa. 7 Case study- the West coast investment Initiative, South Africa. 8 Case study- Agrarian Foundation of Tochantins - Agraguai (FATA), Brazil. 9 Case study- Export orientated agriculture in Puerto Rico 10 Case study- CIDSE development plan, Vietnam 11 Case study- The Polonoroeste Project, Brazil 12-13 Conclusion 14 Bibliography and methodology 15- Appendix ABSTRACT: In South Africa, agricultural co-operatives have been established to improve the livelihoods of the rural community. At the same time, the government has invested in the steel industry, aiming to create jobs and thereby raise standards of living. In Brazil, small co-operatives have also been established. A contrasting approach to agricultural development is export orientated agriculture in Puerto Rico. In Vietnam, a bottom up approach to developing rural areas is a credit and savings program dedicated at the poorest people. A top down rural development project in brazil aims to create jobs and provide land. Both bottom up and Top down approaches have advantages and disadvantages. ...read more.

Disadvantages of the scheme are that it only benefits a small group of people, and does not affect the rest of the region. Top down -The West Coast Investment Initiative, South Africa In 1996 South Africa's department of trade and industry established of a number of "spatial development initiatives" (SDI's) across the country, in areas which it identified as having "unlocked economic development potential".1 One SDI, was the West coast investment initiative (WCII), was designated in western Cape Province, located 50km north of Cape Town. The main project of WCII has been the saldanha sands mini mill steel project. The existence of a deep-water harbour and a railway line running to the iron ore mine at Sishen were key locational factors. Advantages included the jobs created. The construction phase of the mill employed 9,000 people and the operational phase employs 600 people directly, with a further 2,000 related jobs in the local service economy. Related economic activities have been attracted to the region, which are estimated to have added 10% to local economic growth in the late 1990's Disadvantages were that of the original investment 40% "leaked" overseas to pay for imported industrial technology, and that the end of the construction phase caused unemployment. ...read more.

Many migrants were therefore forced to sell their land and return to the cities looking for work. Thousands of people were forced to find waged labour in local factories or on cattle ranches. In addition to these problems indigenous tribes in the area were threatened by exposure to disease and hundreds of plant and animal species unique to the rich rainforest ecosystem are at risk of extinction. Conclusion This report has shown that both approaches to development have advantages and disadvantages. Bottom-up schemes such as the Hertzog agricultural cooperative help the smaller communities to prosper, but they do not however, improve the complicated infrastructure of a country. Top-down development such as the west coast investment initiative improves the economy of a country but often does not benefit the poorest of people. Sometimes a "bottom up" approach is best; sometimes a "top down" approach may be more beneficial, depending on the situation. Large inequalities in development can only be tackled through bigger projects like the polonoereste project in Brazil, although these often have many problems. Bottom up approaches are more likely to benefit the poorest people but will not solve the problem of poverty on a larger scale. The two approaches are not mutually exclusive. It is suggested that development progress will only be achieved when "top down" meets "bottom up" and there is a working relationship between local organisations and larger investors. ...read more.