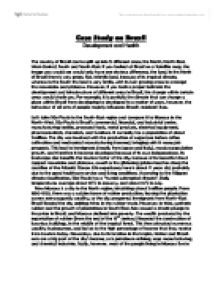 Case Study on Brazil Development and Health The country of Brazil can be split up into 5 different areas; the North, North-East, West-Central, South and South-East. If you looked at Brazil on a Satellite map, the image you would see would only have one obvious difference, the land. In the North of Brazil there is very green, flat, infertile land, because of its tropical climate, whereas in the South the land is very fertile, with its lush grazing areas in amongst the mountains and plateaus. However, if you took a proper look into the development and infrastructure of different areas in Brazil, the change within certain areas would shock you. For example, it is partially the climate that can change a place within Brazil from developing to developed in a matter of years, however, the behaviour of all sorts of people majorly influences Brazil's residents' lives. Let's take S�o Paulo in the South-East region and compare it to Manaus in the North-West. S�o Paulo is Brazil's commercial, financial, and industrial center, manufacturing textiles, processed foods, metal products, electrical equipment, pharmaceuticals, chemicals, and furniture. It currently has a population of about 11million. The city was involved with the production of sugarcane before coffee cultivation and mechanical manufacturing boomed, bringing with it many job prospects. This lead to immigrants (mostly from Japan and Italy), massive population growth, and therefore it became developed because of its own independence. ...read more.

S�o Paulo has very good natural resources and land, handing the country the perfect opportunity to make money from it. Manaus just does not have the land, the climate, or the money to fund any projects. This then leaves the people who live in these places either quite well off because they can earn money, or very poor because they are not earning anything. Money can be brought in from the cultivation of crops or processing of raw materials, depending on the land, and natural resources! For example, S�o Paulo having rather good quality soils, they have the ability to grow/rear whatever they fancy. But Manaus cannot, the only thing that is really possible to cultivate there is trees for timber, and plants for Brazil nuts. Being very poor leads to dramatic health problems such as malnutrition due to the lack of food and availability of clean water, death as a result of the malnutrition, and overall bad mentality of the people who are affected. This all depends on the healthcare system available obviously, and the affordability of it. The people of S�o Paulo have an excellent service, available throughout the city. Yet in Manaus the people find it difficult to afford it, even though it's more likely that the majority of health problems are in the poorer areas, because of the malnutrition and conditions of the area. ...read more.

Crime rates are usually much higher in places of low standard. This is partially due to the governments tending to police and "govern" more in the richer areas, focusing on making them better. However, this is not the case everywhere; the Brazilian Government tore down a lot of favelas throughout the slums of Brazil (a number of which were in S�o Paulo) and replaced them with low-cost housing, with some public water pumps too. When governments do decide to try and do something about the state of some places, sometimes the research that they put into schemes is too poor, and in the end the scheme fails, so the money is wasted. All because they had insufficient knowledge of the area. The indicators are clear to see, they give a good understanding of how much more developed an area is compared to another, even within a country. The only precautions that must be considered with development indicators are that these statistics are only averages, they measure just a tiny part of time in that area. All of the above is not a set of ordinary statistics, it is just information that leads me to say that I believe S�o Paulo is more developed than Manaus. And that partially due to people's actions (from the past or at present, or to come in the future) we have made a huge impact in both places, leaving S�o Paulo and Manaus in the state that they are in today. ...read more.