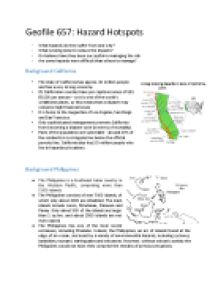 California and the Phillippines - Hazard Hotspots and Human Management of Risks

Transfer-Encoding: chunked ﻿Geofile 657: Hazard Hotspots * What hazards do they suffer from and why? * What is being done to reduce the impacts? * On balance have they been successful in managing the risk * Are some hazards more difficult than others to manage? Background California * The state of California has approx. 40 million people and has a very strong economy. * 25 Californian counties have per capita incomes of US$ 65,000 per annum ? so it is one of the world?s wealthiest places, so this means that a disaster may comprise high financial losses. * It is home to the megacities of Los Angeles, San Diego and San Francisco. * Only sophisticated management prevents California from becoming a disaster zone (in terms of mortality). * Parts of the population are vulnerable - around 20% of the residents in Los Angeles live below the official poverty line. California also has 3.5 million people who live in hazardous locations. Background Philippines * The Philippines is a Southeast Asian country in the Western Pacific, comprising more than 7,000 islands. * The Philippines consists of over 7000 islands, of which only about 2000 are inhabited. The main islands include Luzon, Mindanao, Palawan and Panay. Only about 500 of the islands are larger than 1 sq km, and about 2500 islands are not even named. * The Philippines has one of the most recent volcanoes, including Pinatubo. Indeed, the Philippines, an arc of islands found at the edge of an ocean, are beset by a variety of environmental hazards, including cyclones, landslides, tsunami, earthquakes and volcanoes. However, without volcanic activity the Philippines would not exist: they comprise the remains of previous eruptions. * Typhoons have a particular impact on the densely populated island of Luzon. For example, during a single week in 1989 the Philippines was hit by typhoons Angela and Dan, resulting in 159 deaths and almost 500,000 people were made homeless. ...read more.

1. Firstly education has been given to communities especially those living near a volcanic area, in terms of the protection they can take to save themselves, including warning systems put in place locally. 2. Insurance has to be taken by all so many will not be affected by an event like a volcano or an earthquake. 3. The California Volcano Observatory has been put in place to continuously monitor the volcanoes and report any unusual findings. This is done by the use of sensors that are put in place on the crater of the volcano. Furthermore, GPS data is used to gather more information. 4. Research has been also put in place in order to be able to predict volcanoes in even greater precision. 5. Lastly, a Hazard assessment sheet has been produces which show if an volcano was to erupt, how the flow of lava will be, techniques that can be used like lava solidification or diversion. The probability of eruption and the risks associated are also important parts of this document. Since there was no recent eruption it is hard to judge the success of this new scheme. Hazard 2: Volcanoes: Philippines Taal has erupted thirty-three times since its earliest recorded explosion in 1572. The 1911 eruption resulted in 1,334 deaths and covered an area of 2,000 sq km with ash and volcanic debris which fell as far away as Manila. The island is small and the population is less than 4,000 people. However, they are relatively prosperous. The economy is based on fishing, fishfarming, agriculture, mining for scoria (volcanic deposits), and tourism. The location of settlements on the island is closely related to the rich fertile soils that are suitable for sweet potatoes and corn. Alarmingly, population growth is rapid - 9.6 per cent per year - more than three times the national average. Moreover, the island could not cope with a major eruption. ...read more.

of areas subject to moderate and high susceptibility to landslides is a tool for increasing the awareness of the existing conditions that expose people to landslide. Rainfall advisories are also critical information that people need to understand better and use for early warning. Assessment of evacuation centers: Evacuation centers such as schools, churches, and covered courts that communities identified are assessed in relation to carrying capacity and structural safety particularly during strong typhoons and earthquakes. The assessment includes evacuation routes such as bridges and streets. Mapping of houses and families in areas of moderate to high flood and landslide susceptibility To determine the number of people (especially women, children, elderly, people with disabilities, pregnant women) living in areas prone to landslide and flood that need to be evacuated, community leaders are conducting house mapping. This will form the basis for distributing families to evacuation centers during intense and continuous rainfall and to monitor their safety. Overall, I think for this hazard California has done much more. This is due to the funds they have access to. In fact, California is researching on new ways in order to reduce the risk of landslides. Conclusion: Overall, I would say some hazards are harder to manage than others. For example, it is much easier to predict an earthquake than a volcano. This is mainly the case as earthquakes do not show any signs like volcanoes show signs of volcanic gases (S04), however a plate slip occurs in few seconds as a result there is less time to prepare for an earthquake than a volcano. Similarly, it is very difficult to predict a landslide, as these are very sudden movements in land along a slip plane. Although what we could do is land use planning by not building in vulnerable areas. Thus, different hazards pose different risks to the state of California. To conclude, due to the funds California has access to to it is reasonable to expect them to have better management strategies compare dot the Philippines. ...read more.