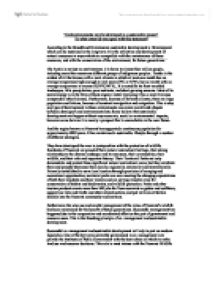 Can sustainable development be achieved in cold environments? Discuss.

'Cold environments may be developed in a sustainable manner' To what extent do you agree with this statement? According to the Brundtland Commission sustainable development is 'development which can be sustained in the long term. It is the utilization and development of natural resources in ways which are compatible with the maintenance of these resources, and with the conservation of the environment, for future generations.' The Arctic is not just an environment, it is home to almost four million people, including more than numerous different groups of indigenous peoples. Tundra is the coldest of all the biomes with a local climate in which at least one month has an average temperature high enough to melt snow (0�C or 32�F), but no month with an average temperature in excess of (10�C/50�F).. It is noted for its frost-moulded landscapes, little precipitation, poor nutrients, and short growing seasons. Most of its stored energy is in the form of dead organic matter (meaning it has a small biomass compared to other biomes). Furthermore, because of its harsh climate, there are large population oscillations, because of constant immigration and emigration. This is why any type of development in these environments can create world wide dispute between developers and environmentalists. Some believe that sustainable development can happen without any economic, social or environmental impacts; however some believe it is merely a prospect that is unreachable in the near future. ...read more.

This is also what the goal should be with the extraction of oil. It is estimated that $65 million was invested in Nunavut last year by the mineral exploration industry. This signals that the potential for mineral development in Nunavut is very promising. And, it should remind people that the source of their wealth is the land - as it has been for thousands of years, and as it will be for generations to come. Nunavut is believed to have the richest natural resource endowment of any jurisdiction in Canada. The strategy is to develop a strong sustainable resource exploration and development sector that is managed by and for the people of Nunavut. This is how development in cold environments can happen in a sustainable manner. However by not co-operating with people who inhabit tundra environments, one can create environmental, social and economic problems that can stop sustainable development happening. On the other hand unwise development is also a problem in the tundra. Although human populations in the tundra are still low, development can have a drastic effect on the environment. Buildings and roads put heat and pressure on the permafrost, causing it to melt. Not only do the buildings sag and the roads buckle, but the fragile tundra soil composition is becomes ruined. People have developed refrigerated foundations to prevent the permafrost from melting and, therefore, buildings from sinking, but some damage has already been done. ...read more.

Scientists still do not know the exact result of a possible change in the world's climate on the tundra. What they do know is that with the tundra being the most fragile biome it will be the first to reflect any change in the earth. Air pollution is also a huge threat to the tundra because of the influence outside winds have on it. Pollution from factories in Russia, other parts of Europe, and the Eastern United States can be carried to the tundra by winds. The foreign pollution forms smog clouds in some tundra areas and contaminates lichen, a large source of food for many animals. The economy is an exciting mix of new growth driven by markets we don't control, and our traditional way of life. People's connections to the land, which we call the traditional economy, are often overlooked by outside observers assessing a cold environment's wealth and economic prospects. Yet, the traditional economy is strong in tundra regions, unlike many other places globally. Economic development in cold environments will depend as much on the abilities to understand and communicate the dynamics of the 'mixed economy', as it will affect the efforts to attract new investment. Most of the people in cold environments depend on harvesting wildlife, or on arts and crafts. It is an economic tradition they take pride in, and one for which the tundra people are recognized, and honoured, around the world. If these factors are taken into consideration, then development can occur in a sustainable manner. ?? ?? ?? ?? ...read more.