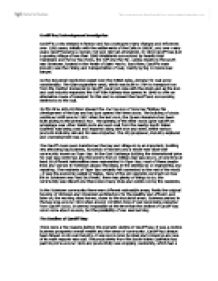 Cardiff Bay Redevelopment investigation Cardiff is a city steeped in history and has undergone many changes and influences over 1500 years; initially with the settlements of the Celts in 500BC, and over many years Cardiff became a Roman Fort and Norman stronghold. In 1810 Cardiff was just a growing village of less than 2000 inhabitants surrounded by heavily tidal marshland and fed by two rivers, the Taff and the Ely. Laying closely to the south was Butetown, located in the Parish of Saint Mary's. Back then, Cardiff's main industry was the mining and transportation of coal, mainly by big 25 tonne load barges. As the Industrial Revolution swept over the British Isles, demand for coal grew considerably. The Glamorganshire canal, which was built in 1794 to transport iron from the Merthyr ironworks to Cardiff, could not cope with the strain and as the iron and coal industry expanded the Taff Vale Railway was opened in 1840 to offer an alternative mode of transport for this and to connect the Cardiff and surrounding steelworks to the coal. By this time John Crichton Stewart the 2nd Marquis of Bute had finished his development of the bay and had just opened the West docks. The building of docks continued untill around 1907 when the last dock, the Queen Alexandra had been built adding to the previous four. The opening of the West Docks gave Cardiff an advantage over other Welsh ports and soon coal from the nearby South Wales Coalfield was being used and exported along with iron and steel, whilst various products including oils and tin were imported. ...read more.

The increased focus on the new Butetown Cardiff Bay is starting to make some of the residents protest about how their whole surroundings are becoming 'touristy'; they highlight the massive shopping, leisure and retail complexes designed to attract the tourists and residents and their cash. There are now projects to further connect the bay to the city; firstly, plans have been drawn up for a Light Rapid Transit System as a means of public transport between the two places opening and freeing up access to the City centre. Secondly, the Peripheral Distributory Road is in place, offering much better access to the M4. Funding for the connection on the East side to the M5 however, has totally dried up; this would have been a very valuable asset to the bay area for both tourists and residents as is the LRTS and existing PDR. The bay's Barrage has also caused protest from some of the residents, some of which have formed CRAB (Cardiff Residents Against the Barrage) who object to this project as the �200 million spent on this is pointless and could be better spend on other projects elsewhere. They also point out that this, together with the new, massive retail, industrial and leisure complexes, the redevelopment is encroaching on residential areas creating an unwelcome cross-over between them. Naturally, CRAB and the Residents Association think that the CBDC are not taking them in to consideration. Another example of the CBDC's apparent lack of consultation was the moving of people out of the old, deteriorating council housing to make way for some of the leisure facilities in the heart of the old Butetown. ...read more.

This would be present due to the better connection of the area to Wales, Cardiff and motorways, and the tourists, workers, residents and lorries that use them. I wouldn't want to change the motorways significantly as they are important. Maybe better and quicker access to motorways in the east, yet would this only heighten the problem? I would monitor road usage and air quality and apply traffic calming if needs be to the inner areas and few of the major roads. When drawing up plans to construct even more roads, I would scrutinise them to make a compromise between traffic/pollution calming and ease of access, probably erring on the environmental side. I think that Cardiff Bay is attracting mainly middle-class office workers for residence in its homes. I also think that there would be a large market for residential areas for more of these and those who are on a slightly lower income also. There are the perfect facilities surrounding them which would attract a lot of people. Countering this, land prices may be too expensive to enable this and so the lower income housing may not be able to be put in to plan. Maybe as an extra income window, some of the sites that gave Butetown and Tiger Bay its history could be opened up or re-constructed as another tourist attraction. The old docks and way of life could be depicted, and the novelty of having so much historical activity in a small community can be used through a tour of the bay where people can make a direct link to the past as these were the actual scenes of events. ...read more.