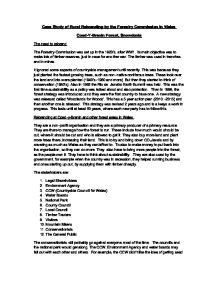 Case Study of Rural Rebranding by the Forestry Commission in Wales Coed-Y-Brenin Forest, Snowdonia The need to rebrand The Forestry Commission was set up in the 1920's, after WW1. Its main objective was to make lots of timber reserves, just in case for another war. The timber was used in trenches and in mines. It ignored some aspects of countryside management until recently. This was because they just planted the fastest growing trees, such as non-native coniferous trees. These took over the land and lots were planted (1940's-1960 and more). But then they started to think of conservation (1980's). Also in 1992 the Rio de Janeiro Earth Summit was held. This was the first time sustainability as a policy was talked about and also protection. Then in 1998, the forest strategy was introduced; and they were the first country to have one. A new strategy was released called 'Woodlands for Woods'. This has a 5 year action plan (2010-2015) and then another one is released. This strategy was revised 2 years ago and is always a work in progress. ...read more.

Mountain Bikers 11. Conservationists 12. The General Public The conservationists will probably go against everyone most of the time. The councils and the national park would get along. The CCW, Environment Agency and water boards may fall out with each other and others. For example, the CCW didn't like the idea of getting seed from the Midlands, but they had to. Timber Traders would want more wood, so they are likely to have conflicts. Generally, they should all get along. The source of my information is Kim Burnham, the Warden of Wales' forests. Evidence of success in rebranding Research Evidence * 55,000 people used Ffestiniog railway the last year. * 150,000 people visited the centre in the last year (was 10,000 in 1982) It is a steady increase, and it has not reached saturation. The new centre brought new and more people, not just proper mountain bikers. * It brings in about �1.5 million in the area. * The Forestry Commission brings in �50 million for Wales every year (from recreation). ...read more.

All of these employ people and people have to pay to use this (parking charge). They bring in a lot of money to the area and for Wales, which is good for the economy because people are spending and letting the money get around. This means that there is a lot for the public to do and they are spoilt for choice. Accessibility there is also very good, with very good roads. They supply them with hire services, so if they don't feel like walking they can cycle, and it works for people with disabilities too, with a special 3 wheel bike. They also have children's activities, like a nature walk, set up by the Welsh Cbeebies. Also doctors now prescribe people to take walks in the forest. These are normally people with high blood pressure and cholesterol. But also people who are overweight and obese use it. Fat camps also do run here. The blind and deaf can also walk here, with assistance. There is the Cafe, which can serve food quick and also a small gift shop and information point. So a variety of people can use a lot of activities and facilities that are on offer. ?? ?? ?? ?? ...read more.