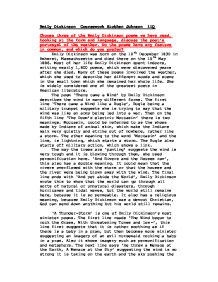 Choose three of the Emily Dickinson poems we have read. Looking at the form and language, discuss the poet's portrayal of the weather. Do the poems have any feature in common, and which do you prefer?

Emily Dickinson Coursework Siobhan Johnson 11Q Choose three of the Emily Dickinson poems we have read. Looking at the form and language, discuss the poet's portrayal of the weather. Do the poems have any feature in common, and which do you prefer? Emily Dickinson was born on the 10th December 1830 in Amherst, Massachusetts and died there on the 15th May 1886. Most of her life Emily Dickinson spent indoors, writing nearly 1,800 poems, which were discovered years after she died. Many of these poems involved the weather, which she used to describe her different moods and scene in the small town which she remained her whole life. She is widely considered one of the greatest poets in American literature. The poem 'There came a Wind' by Emily Dickinson describes the wind in many different forms. The first line 'There came a Wind like a Bugle', Bugle being a military trumpet suggests she is trying to say that the wind was like an army being led into a war. Then on the fifth line 'The Doom's electric Moccasin' there is two meanings. Moccasin, could be referred to as the shoes made by Indians of animal skin, which make the Indians walk very quietly and strike out of nowhere, rather like a storm. ...read more.

She again uses personification to describe the scenes of the thunderstorm, suggesting that the dust made its own hands and threw itself away, to make the wind invisible. The next stanza starts 'The Thunder hurried slow' this line is a paradox meaning everything comes quicker than you think. It is also an oxymoron with the two opposites put together. The next line is 'The Lightning showed a Yellow Beak', also having a double meaning, that the yellow beak of a raven, which has a yellow beak and is black or as lightning, which also appears from behind a cloud. Another reference to a bird is in the next line when she describes lightning as a 'livid claw', the claw of a bird, comparing the weather to a bird. In the next stanza Emily Dickinson writes 'The Birds put up Bars to Nests' which is similar to what people do when a storm is brewing, they bar up their windows, she shows a comparison between birds and humans, making them personified. She then writes 'That held the Dams had parted hold' she uses a personal imagery that God has opened his hands. ...read more.

The third and forth stanzas about fear the weather is generally nicer but not for her. The sun is shining as far as she can see and the birds are singing but she is fearful, and sad. The last stanza is dark like a void, she does not know really what to feel, it was just a void for her because it was neither hot nor cold. All the poems I read have a very obvious common theme, the weather. Emily Dickinson portrayed many different feelings through the weather and many different themes. She also used the weather to make many contrasts between things and used it to reflect religious feelings. The poem I prefer is the last poem I wrote about; 'When I hoped...' I feel that this poem has the most feeling and better imagery. Emily Dickinson, in my view goes a lot deeper into the poem, than just about hope, fear and despair. When I read the poem I get a deeper meaning of a woman's fear of life in general, not just death. I think she spent more time on this poem than the other poems I have read, putting more imagery on how the weather reflects the mood she is in. therefore I feel that this poem is the deepest and most meaningful and therefore my favourite. ...read more.