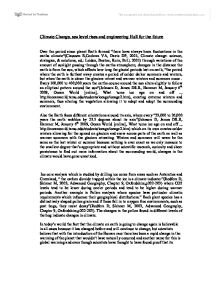 Climate Change, sea level rises and engineering Hull for the future. In areas such as Hull, which is and area that could potentially be at risk of flooding in the near future as a side effect on climate change, defences along the river Humber would be ve

Skinner M, 2003, Advanced Geography, Chapter 9), even dramatic as the long wave radiation from the sun will not be able to penetrate the thick smoggy layer of Co2 and water vapour, the heat circulates around the planet. The heat alone will cause the sea water to expand as the individual water molecules become more excited taking up more space. Furthermore when the ice caps melt more water enters the surrounding oceans and with the increase in heat this brings more water up into the atmosphere through evaporation, not to mention the fact that the worlds oceans are already a major natural storage of carbon dioxide this will bring more of Co2 into the atmosphere. The moisture in the air rises to the troposphere only to fall as rain in areas where it used to fall as snow, and because of the temperature difference between water and ice the ice caps will melt at a faster rate and more water will run-off back to the ocean. This along with the fact that, most of the artic shelf will dissapear into the artic ocean, which could potentially cause sea levels to "rise as much as 15 cm per decade"(Advanced Geography, Redfern D, Skinner M) ...read more.

of civil engineers), as well as individual buildings floating structures from boats to pontoons, have been used for housing and for civil infrastructure. Energy can also be created of the fat flowing tides of the Humber, through Tidal energy, which is transformed into electricity, using internal rotating magnets and copper wire, In its basic form, which according to Pulse Joint Md, Howard Jones "tidal stream power is set to play a major part in the meeting of the UK's future energy needs". A project called the DTI project had been put into "place in 2007, starting with a grant of �878,000. The first stage, was to create a 1/5th (called the pulse stream 1000) scale version of the model and place it in the Humber".( Ice, institution of civil engineers)" The system uses high performance hydrofoils similar to aeroplane wings, which move up and down the esturay twice daily and convert the energuy into elctricity to fed back on shore. The fact that the "Pulse stream 1000 operates in shallow waters close to shore means that the power can be supplied fast and efficiently to places of higher demand"( Ice, institution of civil engineers). The pulse is not much smaller than a car and can produce up to 100kw of enery which is enough to power 70 homes. (2189 words). ...read more.