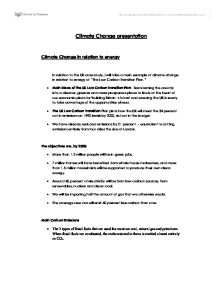 Climate Change presentation Climate Change in relation to energy In relation to the UK case study, i will take a main example of climate change in relation to energy of "The Low Carbon Transition Plan." * Main ideas of The UK Low Carbon Transition Plan. Transforming the country into a cleaner, greener and more prosperous place to live is at the heart of our economic plans for 'building Britain's future' and ensuring the UK is ready to take advantage of the opportunities ahead. * The UK Low Carbon Transition Plan plots how the UK will meet the 34 percent cut in emissions on 1990 levels by 2020, set out in the budget. * We have already reduced emissions by 21 percent - equivalent to cutting emissions entirely from four cities the size of London. The objectives are, by 2020: * More than 1.2 million people will be in green jobs. * 7 million homes will have benefited from whole house makeovers, and more than 1.5 million households will be supported to produce their own clean energy. * Around 40 percent of electricity will be from low-carbon sources, from renewables, nuclear and clean coal. * We will be importing half the amount of gas that we otherwise would. * The average new car will emit 40 percent less carbon than now. ...read more.

The Orkney Isles has a hugely important test centre for wave and tidal machines. At the other end of the UK, the mighty Bristol Channel alone has enough tidal energy potential to power the whole of Wales. A new tidal stream generator - an underwater turbine powered by the streams of the tidal current - off the Devon coast is one of a number of developments helping to drive forward tidal power development. Meanwhile, plans are near completion for what will become the world's largest wave power array, the Wavehub, to be sited off the coast of Cornwall. According to government and industry figures, wave and tidal power combined could meet 12.5 per cent of today's electricity demand - economically and practically - by 2025. Conclusion Between them, wind, wave and tidal power could deliver more than twice as much electricity than the new fleet of nuclear reactors being debated - and the renewables would be built more quickly. Copenhagen According to Yvo de Boer, executive secretary of the United Nations Framework Convention on Climate Change (UNFCCC), the four essentials calling for an international agreement in Copenhagen are: 1. How much are the industrialized countries willing to reduce their emissions of greenhouse gases? ...read more.

to produce natural gas based diesel," Ramirez explained. * Likewise, he stated that there is a project to expand the storage capacity in South Africa, because this country is in the path of the oil route between Venezuela and China. * Minister Ramirez talked of signed agreements with Mauritania, already holding an installed refining capacity that will be evaluated to increase oil production perspectives in that nation. * Agreements were signed as well with Cape Verde and Niger, which are smaller countries and purely oil consumers, including refining projects to increase their production capacity, so as to satisfy their domestic demand. * "In addition, there was signed an agreement with Sudan in the framework of the energy cooperation agreement, so our companies will work in each other countries, but making emphasis on developing Sudan's natural resources, specifically an area that has a significant oil production," Ramirez commented. * Moreover, Minister Ramirez informed that he held a meeting with the Egyptian delegation in order to reach joint agreements, because both countries have high quality on gas development processes. * Finally, he said that among the agreements to be signed with Lybia this Monday in Caracas, there is a project to transform that nation into a significant storage point to distribute oil to Africa. ?? ?? ?? ?? ...read more.