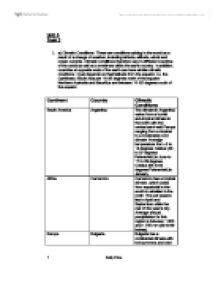 Climate in different cities around the world

Unit 3 Task 2 1. a) Climatic Conditions: These are conditions arising in the world as a result of a change of weather, including latitude, altitude, winds and ocean currents. Climatic conditions therefore vary in different countries of the world as well as sometimes within the same country. In addition, countries at opposite ends of the earth can have similar climatic conditions. It just depends on their latitude from the equator, i.e. the Caribbean, South Asia are 10-25 degrees north of the equator. Northern Australia and Mauritius are between 10-25 degrees south of the equator. Continent Country Climatic Conditions South America Argentina The climate in Argentina varies from a humid sub-tropical climate in the north with the central semi-arid Pampa ranging from a tropical to a moderately cool climate. Average temperature from -5 to 14 degrees Celsius (23 to 57 degrees Fahrenheit) in June to 17 to 29 degrees Celsius (63 to 84 degrees Fahrenheit) in January. Africa Cameroon Cameroon has a tropical climate, which varies from equatorial in the south to sahelian in the north. The wet season lies in April and September while the rest of the year is dry. Average annual precipitation for this region is between 1,000 and 1,750 mm (39 to 69 inches). Europe Bulgaria Bulgaria has a continental climate with hot summers and cold winters. Average annual precipitation is 630 mm (25 inches). Asia Mongolia Mongolia has a continental climate characterized by long cold winters between October and April and short summers between July and August, when most of the rainfall occurs. ...read more.

(3.) The coastal belt which has a hot tropical climate and (4.) a region further south that has a seasonal temperate climate. Rainfall is evenly distributed throughout the year and the nationwide average annual precipitation varies between 1,010 mm (40 inches) and 2,030 mm (80 inches). Average temperature ranges in Rio de Janeiro are from 17 to 24 degrees Celsius (63 to 75 degrees Fahrenheit) in July to 23 to 29 degrees Celsius (73 to 84 degrees Fahrenheit) in February. In comparison to the UK, the weather is very different in Brazil. The climatic conditions will affect holiday visitors from the UK. As Brazil has a tropical climate it is very popular with tourists. The climate in Brazil can affect your holiday and what you do on your holiday: Activities The climatic conditions in Brazil are ideal for sports. There are great spots for hang-gliding in Rio, especially around Pedra Bonita, near Pepino beach. There are strong winds on the coast, which makes it ideal for surfing, with plenty of good surf close to Rio. Windsurfing has caught on in Brazil - while B�zios is a good place to go, the hardcore Mecca is northwest of Fortaleza in places such as Jericoacoara. Sailing is big in B�zios and off the larger resorts along the coast. Inland, the Rio Araguaia in Goi�s and Tocantins is known as a fishing paradise. There are excellent opportunities for rock climbing in and near Rio and in the national and state parks, and hiking is great along the coast and in some of the national and state parks. ...read more.

While there are some good areas to take the plunge and shipwrecks to explore along the north coast, the southern coast's water is warmer and its reefs a bit more protected. The waters off Barahona and Cabo Rojo, near Pedernales, are two popular spots. Bicycling is a great way to take in the country's natural splendor, and there are usually places to rent bikes in major urban areas. Even better, consider bringing your own. Offshore, the Bah�a Saman� has been the preferred breeding area for humpback whales for many millions of years. Several boating companies offer whale-watching tours in season. Health Due to the heat, there are a lot of mosquitoes in the Dominican Republic; they carry diseases such as malaria and Yellow Fever. It is advised to always wear insect repellent. Because of the extreme temperature in the Dominican Republic, it is also advised to constantly apply sunscreen throughout the day to prevent sunburn or sun stroke. Clothes Wear light-coloured clothing; wear long trousers and long-sleeved shirts so you can avoid the sun and getting bitten by mosquitoes, but try not to wear too much clothing, as the climate in the Dominican Republic is very high. The climatic conditions in the Dominican Republic can have an effect on the travel operations. DR can experience heavy rainstorms because of its tropical climate; this will affect transportation and many tourists will not choose to visit DR when this season occurs. During the summer season, a lot of tourist will choose to visit DR because of the ideal holiday weather. Although, June to September is hurricane season and some tourists avoid this season. ?? ?? ?? ?? 1 Kelly Price ...read more.