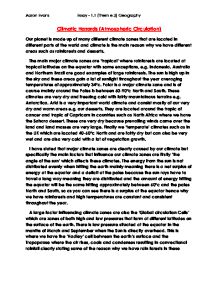 Our planet is made up of many different climate zones that are located in different parts of the world and climate is the main reason why we have different areas such as rainforests and desserts.

The main major climate zones are ‘tropical’ where rainforests are located at tropical latitudes on the equator with some exceptions, e.g. Indonesia. Australia and Northern Brazil are good examples of large rainforests. The sun is high up in the sky and these areas gain a lot of sunlight throughout the year averaging temperatures of approximately 34°c. Polar is a major climate zone and is of course mainly around the Poles b between 60-90°c North and South. These climates are very dry and freezing cold with fairly mountainous terrains e.g. Antarctica. Arid is a very important world climate and consist mostly of our very dry and warm areas e.g. our desserts. They are located around the tropic of cancer and tropic of Capricorn in countries such as North Africa where we have the Sahara dessert. These are very dry because prevailing winds come over the land and land masses are very large. Finally we ‘temperate’ climates such as in the UK which are located 40-60°c North and are fairly dry but can also be very wet and are also very cold with a lot of vegetation growth.

I have stated that major climate zones are clearly caused by our climate but specifically the main factors that influence our climate zones are firstly ‘the angle of the sun’ which affects these climates. The energy from the sun is not distributed evenly when hitting the earth mainly meaning there is a net surplus of energy at the equator and a deficit at the poles because the sun rays have to travel a long way meaning they are distributed and the amount of energy hitting the equator will be the same hitting approximately between 60°c and the poles North and South, so as you can see there is a surplus at the equator hence why we have rainforests and high temperatures are constant and consistent throughout the year.

A large factor influencing climate zones are also the ‘Global circulation Cells’ which are zones of both high and low pressures that form at different latitudes on the surface of the earth. There is low pressure situated at the equator in the months of March and September when the Sun is directly overhead. This is where we have the ‘Hadley’ cell between the earth’s surface and the Tropopause where the air rises, cools and condenses resulting in convectional rainfall clearly stating some of the reason why we have rain forests in these zones of the world. But, we also have low pressure at 60°c which is between the ‘Ferrel’ and ‘Polar’ cell where the same occurs yet we have more temperate climates rather than tropical, but again this where the angle of the sun comes in where energy is not even and at 60°c there is a deficit rather than a surplus at the equator causing different climates. In-between the equator and 60°c North and South at 30°c we have high pressure in-between the ‘Ferrel’ and ‘Hadley’ cell where the rising air would have hit the Tropopause then sinking, warming and expanding, resulting in warm, dry conditions hence why we see our world desserts such as the ‘Gobi Dessert’. So you can see here by these circulation cells why it is a valid factor for different climate zones. But with the angles of the sun causing a surplus and deficit of energy we would expect a large convection cell on the whole of the world’s surface causing air to rise cool and condense then sink warm and expand causing different climates to what we have, but of course the earth is on an axis of 23° causing different winds splitting the cells up into Polar, Ferrel and Hadley.

We also have ITCZ (Inter Tropical Convergence Zones) which is the area of low pressure caused by concentration of the sun. So this is where our seasons come in, e.g. in the UK the sun is on us or in the Northern hemisphere during June when we have our longest day on the 21st and then in the Southern hemisphere in December when we have our shortest day on the 21st again. So as you can see theses are our winters and summers and we have more of an energy surplus in the summer.

There are also other smaller factors that also affect our world’s climate zones such as Prevailing Winds. The temperature of the winds is determined by its area of origin at the surface over which it blows. So for example in the UK we have Westerly prevailing winds that come over the Atlantic Ocean picking up moisture and then crossing the UK which has a small land mass hence why we have a temperate climate, and also why coastal areas are warm in the winter and cool in the summer and in land areas are warm in the summer and cool in the winter, because it follows the pattern of the sea. .E.g. Wales is wetter than London because it is more western and also mountainous. There is also Land and Sea which has an affect on climate zones, simply because the sea is more transparent than the land and is capable to heating up to a depth of 10m. In the summer the sea is colder because it takes longer to heat up than the land and by the time it warms winter has arrived because the sea has a low ‘albido’.  So in land is warm in the summer and cold in the winter and the other way around on the coast which is why you never see snow on the coast because the temperature is warmer as the prevailing winds from the sea are mild. Finally there is the height above sea level, so as the height of the mountains increase in areas such the Andes in South America they present a decreasing surface area from which to heat the surrounding air. The air pressure decreases as does its ability to hold heat because the air is thinner. There is also less land mass to absorb heat. So this is why very mountainous regions such as the Himalayas in Asia and very large mountains such as Mount Everest have very dangerous physical elements and are not inhabited as the temperatures are freezing and oxygen is in limited supply, so again these areas have different climates that are effected by this.