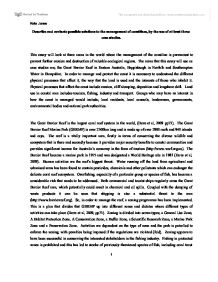 Describe and evaluate possible solutions to the management of coastlines, by the use of at least three case studies. This essay will look at three areas in the world where the management of the coastline is paramount to prevent further erosion and destruction of valuable ecological regions. The areas that this essay will use as case studies are; the Great Barrier Reef in Eastern Australia, Happisburgh in Norfolk and Southampton Water in Hampshire. In order to manage and protect the coast it is necessary to understand the different physical processes that affect it, the way that the land is used and the interests of those who inhabit it. Physical processes that affect the coast include erosion, cliff slumping, deposition and longshore drift. Land use in coastal area includes tourism, fishing, industry and transport. Groups who may have an interest in how the coast is managed would include; local residents, local councils, landowners, governments, environmental bodies and national park authorities. The Great Barrier Reef is the largest coral reef system in the world, (Dove et al, 2009 pp73). The Great Barrier Reef Marine Park (GBRMP) is over 2300km long and is made up of over 2900 reefs and 940 islands and cays. The reef is a vitally important area, firstly in terms of conserving the diverse wildlife and ecosystem that is there and secondly because it provides major security benefits to coastal communities and provides significant income for Australia's economy in the form of tourism (http://www.wwf.org.au). ...read more.

Figure 1 Map showing the Queensland coast and zoning areas of the Great Barrier Reef The United Kingdom also needs to manage its coastline as the next two case studies will show. The coastline of the UK is divided up into a series of cells that each have their own Shoreline Management Plan (SMP). An SMP is a large scale project to assess the risks associated with coastal processes and to devise strategies to reduce the risk to coastal communities and the environment (http://www.environment-agency.gov.uk). Figure 2 Map of United Kingdom showing North Norfolk Figure 3 Detailed Map of Norfolk North Norfolk is a very good example of an area where the coast in under constant threat from erosion. The cliffs are predominantly made from soft sand and clays, meaning that they are extremely vulnerable to erosion by waves as well as slumping caused by rainwater. (See figure below for an example of a large landslide on the Norfolk coast). Figure 4 Photo showing cliff slumping at Sidestrand, Norfolk. This is due to rainwater saturation in soft clay cliffs which leave them vulnerable to landslides. http://www.bgs.ac.uk/science/landUseAndDevelopment/landslides/Sidestrand.html The position of the coast is also a factor that needs to be considered as longshore drift causes large movement of sediment in a southerly direction. Following some extreme flooding in 1953, it has become to be vitally important to protect the coast to stop further loss of; life, valuable agricultural land and to conserve the Norfolk Broads (Dove et al, 2008, pp62-65). ...read more.

The SMP is generally a combination of "hold the line" and "no active intervention" except for a small stretch on the River Hamble estuary where "managed realignment" is in place. (See appendix 1, 2 and 3 for SMP maps). The areas where there is a policy of hold the line is where the coast is primarily given over to important areas of industry, settlement and conservation. It can be seen that the coastal defence plan for Southampton Water needs to be able to take into account a variety of conflicting interests. The SMP states that the approach to managing the coast needs to be sustainable, taking into account the economy, the environment, tourism and future development but acknowledges that the cost is likely to rise with time. In cell 5c11, for example, (see appendix 4) the short term policy is to hold the line and continue to maintain existing flood defences, but in the longer term a policy of no active intervention would be adopted because it would become no longer economically viable to hold the line (see appendix 5) (www.northsolentsmp.co.uk). In conclusion, it has been shown by this essay that managing the coast is a complicated process that needs to be flexible enough to take into account a variety of interests and conflicts. The coast is a dynamic environment that is vulnerable to a range of physical processes and each case needs to be considered individually with a view to changing policies over time. ...read more.