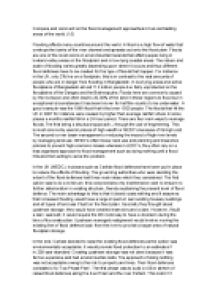 ﻿Compare and comment on the flood management approaches in two contrasting areas of the world. (15) Flooding affects many countries around the world. A flood is a high flow of water that overtops the banks of the river channel and spreads out onto the flood plain. Floods are one of the most common environmental hazards that affect people living in lowland valley areas on the floodplain and in low lying coastal areas. The nature and scale of flooding varies greatly depending upon where it occurs and thus different flood defenses have to be created for the type of floods that happen. For instance in the UK, only 2% live on a floodplain, this is in contrast to the vast amounts of people who are in danger from flooding in Bangladesh. In low lying areas and active floodplains of Bangladesh almost 110 million people live fairly unprotected on the floodplains of the Ganges and the Brahmaputra. Floods here are commonly caused by the monsoon and often lead to 20-30% of the land in these regions to flood but in exceptional circumstances it has been known for half the country to be underwater. ...read more.

In the end, Carlisle decided to raise the existing flood defences as the option was environmentally acceptable. It would provide flood protection to an estimated 1 in 200-year standard. Creating upstream storage was not done because it was far too expensive and had environmental costs. The approach of doing nothing was not acceptable owing to the risk to property and lives. Their flood defences consisted of a ‘Two Phase Plan’. The first phase was to build a 4.5km stretch of raised flood defences along the river Eden and the river Petteril. This cost £13 million and protected 1500 properties. The second, most costly phases consisted of a 5km stretch of flood defences focusing on the river Caldew. It cost £25 million and protected more than 1000 properties. In parts of the UK, flood relief channels are used to by-pass existing urban areas where straightening the channel is not an option and are used as flood overflow channels. Large concrete channels, such as at the Thames in London are expensive to build, damage the river ecology and are visually unattractive, especially at low flow. ...read more.

It?s status as an LEDC prevents it from having the funds necessary to successfully prevent against flooding. To conclude the differences in flood management approaches for the UK and Bangladesh are vastly different. The difference in wealth between the countries places a huge burden on Bangladesh thus limiting its ability to actively ensure that flood defences are modern and equipped to tackle the problem. There are also budget constraints in regard to the 2007 Carlisle Floods, although not to the extent of Bangladesh. The 2008 Economic Crisis was well upon Britain at the time and despite its status as an MEDC, Britain did not provide the best possible flood defences available for the area. Many argue that the current ones are not suitable in the event of a ?freak? flood like that of 2007. In terms of the actually flood defences, hard engineering is primarily used in MEDC?s as it is the most effective. LEDC?s who do not have access the sort of financial backing that MEDC?s have, generally have to settle for temporary or substandard flood defences and thus we can conclude that the differences in flood defence approaches correlate with the differences in wealth. The LEDC?s Bangladesh are poorer and thus their flood management approach is weaker. ...read more.