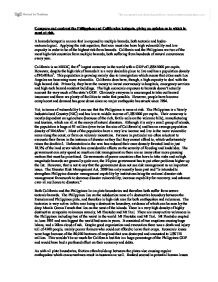 Compare and contrast the Philippines and Californian hotspots, giving an opinion as to which is most at risk. A hazards hotspot is an area that is exposed to multiple hazards, both tectonic and hydro-meteorological.

Compare and contrast the Philippines and Californian hotspots, giving an opinion as to which is most at risk. A hazards hotspot is an area that is exposed to multiple hazards, both tectonic and hydro-meteorological. Applying the risk equation, that area must also have high vulnerability and low capacity in order to be of the highest risk from hazards. California and the Philippines are two of the most high-risk countries from multiple hazards, both suffering from hundreds of natural occurrences every year. California is an MEDC, the 6th largest economy in the world with a GDP of US$65000 per capita. However, despite the high risk of hazards it is a very desirable place to live and has a population density of 90.48/km2. This population is growing mainly due to immigration which means that cities such Los Angeles are becoming more vulnerable. California does have, though, a high capacity to deal with the high hazard risk. Primarily, they have the money to invest enormously in hospitals, emergency services and high-tech hazard-resistant buildings. The high economic exposure to hazards doesn't actually account for very much of the state's GDP. Obviously everyone is encouraged to take out hazard insurance and there are plenty of facilities to make that possible. However, people have become complacent and demand has gone down since no major earthquake has struck since 1994. Yet, in terms of vulnerability I can see that the Philippines is more at risk. The Philippines is a Newly Industrialised Country (NIC) ...read more.

California also suffers enormously from earthquakes but not so much from volcanoes as it lies on a conservative boundary between the Pacific and North American plate. The San Andreas fault runs all the way down the coastline of California where many cities namely San Francisco lie right on top. The Pacific plate moves the fastest so a lot of friction is created causing regular, high magnitude earthquakes. Populations on the Andreas fault have an average probability of 30 % of receiving a 6 to 7.5-magnitude earthquake and are ranked 6th in potential human losses due to earthquakes and 2nd in terms of potential economic losses because of all the expensive infrastructure that could be destroyed. Two high magnitude earthquakes struck California over 5 years. The second one, January 1994 in Los Angeles was of magnitude 6.7 on the Richter scale. There were also many aftershocks ranging from magnitude 4 to 5 which caused further damage. Because of the dense population in Los Angeles, human impacts were big considering the efficiency of the emergency services and aid available: 57 died, more than 1500 were seriously injured, 9000 homes were without electricity and 48,500 people had no access to clean water. Although both California and Philippines are both susceptible to frequent tectonic events, Filipinos are clearly more at risk especially as they have the added risk of very high magnitude volcanic eruptions and tsunamis which are often secondary effects of earthquakes. On top of that there is much bigger population in the way. ...read more.

At the same time another fire further south destroyed 60 structures in Sacramento. As more and more immigrants settle on the poorer edges of the city, Los Angeles' vulnerability will increase. If action isn't taken the next wildfire might be in danger of sweeping through the whole of the city. In conclusion, I found that, both The Philippines and California receive regular earthquakes, and both have a high risk of landslides due to the mountainous terrain and soil erosion caused by deforestation (and wildfires in California's case). On top of that, the Philippines is part of the Ring of fire and has the rare but serious risk of eruptions from the 18 active volcanoes. The Philippines and California are also prone to flooding and drought. The Philippines receives around 10 Typhoons a year and experiences annual flooding as a result. El Nino intensifies the risk of drought in the Philippines but, although there are serious long-term effects on the peoples' welfare, California also has the added threat of fire. I think this adds up to a pretty much equal magnitude of risk on both sides. However, it is evident that the Philippines is affected far more frequently and severely. It is clear that the Philippines has a higher vulnerability in terms of population, local attitude, and the fragility of their economy. They also have a far lower capacity, with a GDP 12 times smaller than California's. If I go back to the risk equation, the fact that the Philippines has a higher vulnerability and lower capacity means it is definitely the most at risk. ...read more.