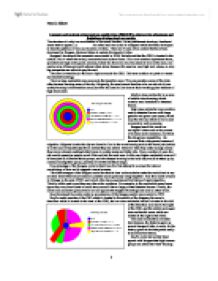 Compare and contrast urban land use models from 1920-1970's. what are the advantages and limitations of urban land use models. The structure of a city is a combination of form and function. As any settlement develops, functional zones start to appear, i.e. An urban land use model is a diagram which has been developed to describe patterns of form and function of cities.. There are 3 main urban models that have been developed by Burgess, Hoyt and Mann to explain the layout of cities. Burgess's developed the concentric zone model in 1924. He believed that the CBD is located in the middle. This is where the social, commercial and cultural focus. This zone contains department stores, specialist and high order goods, cinemas, hotels etc. there are very few places to live in this zone, and mainly only offices and multi national chain stores because this area has very high land values, so only big companies can afford to pay the rent. The zone in transition (or the inner city) surrounds the CBD. This area contains car parks or vacant and derelict buildings. The low class residential zone surrounds the transition zone. This area contains some of the older often terraced housing areas of the city. ...read more.

Hoyt developed his sector model as an extension of the Burgess centric zone model in 1939. Hoyt's model consists of the CBD which is located in the middle of the diagram, the zone in transition which is located to the west of the CBD, the low class residential which is located to the left of the transition zone and to the right of the CBD, and the middle and upper class residential zones which are located to the right of the CBD. The zone in transition is located here because, the factories grew up around transport links, in order for the factory goods to be transported easily to and from the factory. Hoyt's model shows that Hoyt agreed with Burgess that high income groups can afford the 'best' housing and jobs leaving the poorer people to live in the least desirable areas, i.e. the zone of transition. Hoyt argued that the sectors developed out in needles because some outlying areas had better transport access to the CBD than others. For example his model shows that high class residential grew up along suburban railway lines. The model also shows that at one end the rich people are situated, and at the other you have the poor people. ...read more.

All 3 models say that poor people live in the inner city area as it is the least desirable area and contains the poorest housing. All the models say that wealthy people live in the more desirable part of the city as they can afford to do so. All the models are slightly different from one another. For example Mann's model takes into account the prevailing winds in England, Burgess's model takes into account immigration and Hoyt's model takes into account transportation. One difference between the Burgess model and Mann's is that local government played a role in slum clearance and gentrification. This led to large council estates which took the working/low incomes to the city edge. This is the opposite to Burgess model as the working class are situated in the inner city zone. Another difference between the models is that the Burgess and Hoyt model are based upon American society whereas the Mann's model is based upon England. The advantage of urban models is that they at least can show us how one city might have been formed. The disadvantage of urban models is that no one urban model can be used to demonstrate how all the cities in the world formed, look like now and will look like, as they are based upon generalisations. ?? ?? ?? ?? Natalie Ibbott 1 ...read more.