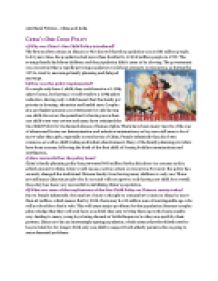 ﻿Anti Natal Policies ? China and India China?s One Child Policy a) Why was China?s One Child Policy introduced? The first modern census in China in 1953 showed that the population was at 583 million people. In 50 years time, the population had more than doubled to 1252.8 million people in 1999. The average family had three children, and the population didn?t seem to be slowing. The government was concerned that a rapidly growing population would put pressure on resources, so during the 1970s, tried to encourage family planning and delayed marriage. b) How was the policy implemented? If a couple only have 1 child, they could receive a 5-10% salary bonus, but having 2 would result in a 10% salary reduction. Having only 1 child meant that the family got priority in housing, education and health care. Couples also got higher pensions on retirement for only having one child. However, the penalties for having more than one child were very severe and many have criticized the One Child Policy for its claimed abuses of human rights. ...read more.

This will cause major problems for the population. Because couples acknowledge that they will only have one child, they aim to bring them up in the best possible way, leading to many young boys being classed as ?Little Emperors? as they are spoilt by their parents. China now has an increasingly ageing population, which means that the elderly need to be provided for, for longer. With only one child to support both elderly parents, this is going to cause financial problems. http://www.learner.org/courses/envsci/visual/img_med/china_one_child.jpg China vs India- A comparison of policies a) Main points of the Indian and Chinese population policies: China India Later age for marriage- 25 for women, 28 for men Reduce TFR to 2.0 and have a stable population by 2045 Couples having to apply for the right to start a family Reduce IM from 50 to 30 per 1000 by 2010 A 5-10% salary bonus for limiting to one child To improve child health by vaccination programmes against preventable diseases A 10% salary reduction for having two children To increase the awareness and availability of family planning and contraception. ...read more.

c) Why did India?s policy fail to reduce birth rates? Too much propaganda and being told what to do lead the people of India to turn against the scheme. It was also difficult to change their traditions, as usually, large families are normal. Not enough awareness in the more rural areas also meant that it was harder for these people to hear about the family planning schemes. d) Kerala Success- what were the main objectives of the successful policy in Kerala state? Kerala has the highest literacy rate in India, 91%, which is a lot higher than the average of only 65%. Along with this, its growing service economy means that it is often quoted as indicative of a middle class society. In Kerala, many couples have had their children in quick succession, do not use any spacing methods and then opt for sterilization. The National Population Policy has seen success here with female empowerment and a majority of married women choosing to use contraception. Because of the high literacy rate, most people are educated, so would prefer to have a career and wait for children, which is why the family planning scheme has worked so well here. ...read more.