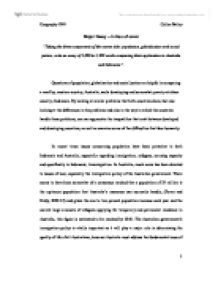 Comparing population, globalisation and social justice in Australia and Indonesia

Major Essay - in lieu of exam "Taking the three components of the course title: population, globalisation and social justice, write an essay of 2,000 to 2,500 words comparing their application in Australia and Indonesia". Questions of population, globalisation and social justice are helpful in comparing a wealthy, western country; Australia, and a developing and somewhat poverty-stricken country; Indonesia. By looking at similar problems that both countries share, but also looking at the differences in the problems and also in the way in which the countries handle these problems, one can appreciate the inequalities that exist between developed and developing countries, as well as examine some of the difficulties that face humanity. In recent times issues concerning population have been prevalent in both Indonesia and Australia, especially regarding immigration, refugees, carrying capacity and specifically in Indonesia; transmigration. In Australia, much news has been devoted to issues of race, especially the immigration policy of the Australian government. There seems to have been somewhat of a consensus reached that a population of 23 million is the optimum population that Australia's resources can currently handle, (Foran and Poldy, 2002:12) and given the one to two percent population increase each year and the current large amounts of refugees applying for temporary and permanent residence in Australia, this figure is estimated to be reached by 2010. The Australian government's immigration policy is vitally important as it will play a major role in determining the quality of life of all Australians, however Australia must address the fundamental issue of the ability of the environment and to cope with population increases. ...read more.

New South Wales Premier, Bob Carr says we should actually reduce immigration levels, not that he necessarily agrees with the Federal Coalition but because he thinks Sydney is getting too crowded. With one fifth of Australia's population squeezed into the Sydney basin, it is a legitimate observation and revelas Australia's major social justice issue. People in general and in this case, the Australian people are naturally drawn to centres of economic activity because of the instinctive infrastructure that occurs to support economic and commercial activity. There is also a large market catchment where competition is greater and prices are tailored accordingly. Due to these factors in recent years there has been a continual shift of the population from rural centres to urban regions, that cannot cope with large populations. Australia's rural centres are left small and without; commercial activity or opportunity, centralised skilled workers or competition with a subsequent increase in prices and cost of living. The 'exodus from the bush' as the National Party calls it, whereby young poeple living in rural and regional centres have to realistically look at moving away if they want to get better employment opportunities is also a major problem and similarly adults too are finding they cannot afford to live in the country. As one source argues, "one of the keys to effective decentralisation options is the stimulation and maintenance of economic activity" (Connell, 1998:24). The Australian government can certainly 'kick start' economies and have in the past by injecting larges sums of money. But in the end, Governments cannot continue to spend more than the budget allows and at the moment it is not considered economically of great importance to do so. ...read more.

In both Indonesia and Australia environmental issues must be addressed, however Indonesia has a range of equally if not more important issues such as poverty and the economy to focus on. Herein lies a distinct difference between Indonesia; where poverty is absolute and Australia; where poverty is relative. Due to the arguably affective welfare system in Australia, every person is entitled to some income from the government and has the ability to at least live, in comparison to Indonesia where poverty is life threatening to the weak economy and inability of welfare. In Indonesia and Australia, population issues remain at the forefront of newsand in recent times population problems in Australia have resulted in rural-urban problems, whereas in Indonesia, methods of transmigration have created confusion and accentuated economic and social problems. The impact of globalisation has been far more prominent in Indonesia, in creating social problems and increasing poverty, compared to Australia where globalisation evokes almost completely different emotions, as global interest and activity is vital to the success and well being of the Australian economy. Whilst many Australians benefit from the influence of global companies with resulting lower prices and a competitive market, Indonesians are forced to work often in poor conditions, long hours for little pay and are often forced to move from their agricultural jobs to seek work in the larger factories. Indonesia's economy, devastated by the Asian economic crisis is struggling to grow and raise the currently low standard of living in Indonesia. The issues of population, globalisation and social justice that both countries are confronted with, but also the different problems and methods of resolution sought by the respective governments provides an interesting contrast a wealthy, western country; Australia, and a developing and somewhat poverty-stricken country; Indonesia. ...read more.