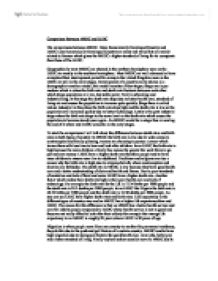 Comparison Between MEDC and LEDC

Comparison Between MEDC and LEDC The comparisons between MEDC- More Economically Developed Country and LEDC-Less Economically Developed Country are many and varied but are mainly related to finance which gives the MEDC a higher standard of living for its occupants than those of the LEDC. Geographically most MEDC are situated in the northern hemisphere were as the LEDC are mostly in the southern hemisphere. Most MEDC are well advanced or have completed their development period for example the United Kingdom were as the LEDC are still in the early stages. Development of a country can be shown in a demographic transition model; this model consists of four stages. Stage one is pre modern which is when the birth rate and death rate fluctuate between each other which keeps population at a low, but stable point. Next is urbanizing and industrializing, at this stage the death rate drops due to better health care, standard of living etc and causes the population to increase quite quickly. Stage three is called mature industrial in this phase the birth rate stays high and the death rate is low so the population still increases quickly due to better technology. ...read more.

The death rate in MEDC is low because they have good health care and a better understanding of diets and health and fitness. Due to poor standards of sanitation and lack of food and water LEDC have a higher death rate. Another factor which makes their death rate high is their poor health care and lack of technology. For example the birth rate for the UK is 11.34 births per 1000 people and the death rate is 10.3 deaths per 1000 people. In an LEDC like Nigeria the birth rate is 40.52 births per 1000 people and the death rate is 14.58 deaths per 1000 people. As you can see LEDC have higher death rates and birth rates. Life expectancy in the different types of country vary and an MEDC has a higher life expectancy than and LEDC. The reason for this difference is that an MEDC has a better health service and care for elderly people compeered to LEDC whose health service is not as good and they can not really afford to look after their elderly for example the average life expectancy in an MEDC is roughly 85 years where LEDC is 38 years of age. ...read more.

MEDC have lots of resources in both types of population. It is the size of the population that causes worries for the MEDC countries, if the population is to large the resources will start to become depleted. Although the LEDC can support and provide for their people the essentials i.e. food, water, shelter and medical care- some cannot and need help from out side, but even after help they are no better off. Other LEDC need to develop better trading, export and some times tourism to assist the economy this requires the cooperation and interaction between governments. In MEDC the education system is more advanced and students are encouraged to learn and have a better chance of employment, where as in LEDC children are needed to go to work and support the family. The job opportunities in MEDC are available but in LEDC they do not have the trade and industry therefore education becomes unimportant. To conclude this comparison MEDC have lower birth and death rates due to good health care. MEDC have a better standard of life because of education, job prospects therefore are financially better off. Unfortunately LEDC do not have such opportunities. By Chris Taylor ...read more.

Well written and structured essay. Many key differences described with some explanations. Some use of named examples and statistics, though there is opportunity to do this more often.Many other areas could also have been covered - those done so were mainly social (also access to fresh water, literacy rate and other related dev indicators) and economic (also, industry, employment). But there are also POLITICAL and ENVIRONMENTAL factors that could be considered. These are the 4 main areas that should be covered when addressing the topic of development and comparing LEDCs and MEDCs.