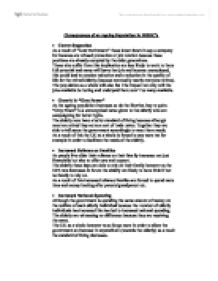 Consequences of an Ageing Population In MEDC's.

Consequences of an Ageing Population In MEDC's * Career Stagnation As a result of "Later Retirement" those lower down in say a company for instance are refused promotion or job rotation because these positions are already occupied by the elder generations. Those who suffer from this implication are less likely to work to there full potential and many will leave that job and become unemployed, this could lead to pension reduction and a reduction in the quality of life for the retired elderly (because eventually nearly everyone retires). The population as a whole will also fee l the impact not only will the jobs available be boring and underpaid there won't be many available. * Growth in "Grey Power" As the ageing population increases so do the liberties they require. "Grey Power" is a stereotypical name given to the elderly who are campaigning for better rights. The elderly now have a better standard of living because although most are retired they act as a sort of trade union. Together they are able to influence the government accordingly to meet there needs. ...read more.

It is for this reason why the elderly have increased reliance on personal financial provision. The elderly therefore have less money to spend on leisure activities if some of their saving are required to supplement inadequate government funding. The UK as a whole feels insulted, as it has to spend vast amounts of money on the elderly who don't appreciate it (taken for granted). Unfortunately the government is obliged to pay every elderly person equally despite the fact that some are wealthy enough to support themselves and many others. * Increased Tax Burden To meet the ever-increasing funds required to support the elderly, taxpayers are forced to pay more. The elderly don't appreciate the increase because their pensions don't improve the tax increase allows the government to pay everyone equally, and because "everyone" is increasing more money is needed to accommodate this increase. The UK as a whole is under strain to pay these taxes of which many object to. The standard of living also falls as a result of this increased tax burden. * Employment Change The elderly are being encouraged back into corporations such as Marks and Spencer's because they have what the customer is looking for courtesy; knowledge, experience and good customer care in general. ...read more.

* Decreased Standard of Living among the Elderly As the elderly population increases, the money set aside by the government for the elderly has to be divided by more people this results in a lower amount of money being given to each person leading to a decreased standard of living among the elderly. The elderly are unable to experience a good quality of life without relying on personal financial provisions. Pressure is also put on the UK as a whole as it has to support more people of that older age. * Later Retirement The population is not only living longer it is also working longer. Later retirement leads to "Job Stagnation". The elderly who work longer have a better quality of life. The UK as a whole has higher unemployment rates because the young can't find jobs because the elderly have them and those in job can't be promoted for the same reason. This is a vicious circle because the elderly won't be able to work forever and the young who should be paying taxes to provide money for the elderly when they do retire are unemployed due to the elderly. ...read more.