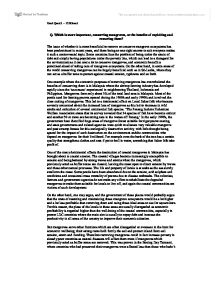 Q. Which is more important, conserving mangroves, or the benefits of exploiting and removing them?

The issue of whether it is more beneficial to remove or conserve mangrove ecosystems has been predominant in recent years, and there being no one right answer to suit everyone makes it such a controversial topic. Some countries face the problem of being under the strain of debt and simply having populations under the poverty line, which can lead to a disregard for the environment as it can cost a lot to conserve mangroves, and economic benefit is prioritised ahead of taking care of mangrove ecosystems. On the other hand, in some areas of the world conserving mangroves can be hugely beneficial such as in Sri-Lanka, where they can act as a buffer zone to protect against coastal erosion, typhoons and so forth.

One example where the economic purposes of removing mangroves has overwhelmed the benefits of conserving them is in Malaysia where the shrimp farming industry has developed rapidly since the ‘successes’ experienced in neighbouring Thailand, Indonesia and Philippines. Mangroves form only about 3% of the total land area in Malaysia. Most of the ponds used for farming prawns opened during the 1980's and early 1990's and involved the clear cutting of mangroves. This led to a detrimental effect on Local fisher folk who became severely concerned about the increased loss of mangroves as this led to decrease in wild stocks and extinction of several commercial fish species. ‘The Penang Inshore Fishermen Welfare Association states that its survey revealed that 34 species of fish have become extinct and another 50 or more are becoming rare in the waters off Penang.’ In the early 1990's, the government here identified huge areas of mangrove forest suitable for tiger prawn rearing, and state governments and related agencies were quick to alienate very valuable mangrove and peat swamp forests for this ecologically destructive activity, with little thought being spared for the impact of such destruction on the environment and the communities who depend on mangroves for their livelihood. For example even the bark of the tree has a certain quality that strengthens clothes and nets if put to boil in water, something that fisher folk take profit of.

One of the many detrimental effects the destruction of coastal mangroves in Malaysia has brought about is coastal erosion. The coastal villages become increasingly susceptible to erosion and being battered by strong waves and storms when the mangroves, which previously acted as buffer zones are cleared, leaving the coast open to direct erosion by waves and these other natural processes. The life and property of locals is at stake as the sea slowly swallows the coast. Some ponds have been abandoned due to the erosion, acid sulphate soil conditions and occasional mass mortality of prawns due to disease outbreaks. The culturists, farmers and government agencies do not make any effort to rehabilitate the degraded mangroves to make them suitable for locals to live off, and again the coastal communities are victims of such development.

On the other hand, one may argue, and the government of these places would probably argue that the costs of restoring and maintaining these mangrove ecosystems would be a lot higher and a lot less profitable than removing them and using these ideal areas to use for aquaculture. For this reason, the pleas of the locals in these areas are usually disregarded as economic profitability is regarded higher than the well-being of the coastal communities, especially in poorer LDC countries where the main aim is usually to repay debt and increase the productivity in all areas of the country to improve their economic situation.

But mangroves serve other functions which are often disregarded or overseen in the hunt for economic wellbeing; their strong roots hold firmly the soil and protect inland from soil erosion, storm and flooding. Therefore removing mangroves could in fact increase poverty in already poor countries as natural disasters will affect them more if mangroves which previously acted as buffer zones are removed. This was proven in the Boxing Day Tsunami, where countries who had preserved their mangroves were affected less than those who hadn’t. This is because once established mangroves can serve as coastal protection from hurricanes and typhoons, and riverine mangroves help remove pollutants before they enter adjacent coastal waters. In spite of these documented ecological functions, mangrove forests have been dredged and filled for decades to provide other coastal uses, like ports and housing. Additionally, mangrove wood can be used for construction, to build houses, fences and pole markers. It can be used for fuel and even the process of burning it to turn it into charcoal is beneficial: the smoke is channelled into a funnel where condensation turns it back into water. This water has many useful properties, one of them being medicinal for cough and skin disease. Clearly using these mangroves responsibly could have huge benefits not only economically, but also in terms of the medicinal qualities they could provide.

Development is removing the forests. Mangroves have been lost to land reclamation, and to construction of fishponds and inter-islet causeways. Additionally mangroves have been degraded through harvesting for fuel wood and structural materials and dumping of rubbish which pollutes the mangrove habitat. Losses and degradation of mangroves are expected to increase with the growing population and development pressures as populations increase and people are forced into more and more un-inhabited areas. But is this necessarily the wrong way to go about things? One may argue that it is not, as providing for the ever-growing population of the world should be the most important thing, and if that means removing areas of mangroves to develop on, then that should be acceptable. Mangroves aren’t simply being put to waste, as when they are cleared new benefits arise, which can be considered a lot more important, whether it is more space to accommodate people, or the benefits aquaculture brings, such as employment for locals and money in local economies. Although this could be the case, quite the opposite is being identified with the stresses caused by development on the South Tarawa. In parts of the world where mangroves have been destroyed, people have noticed a great decline in the fish catch. Destruction of the mangroves of Kiribati could mean not only less fish to eat but also possibly reduced national income from the sale of fishing rights.This rich ecosystem is home to several aquatic species - all kinds of fish, snails, cockles, shrimps and crabs -, reptiles like snake and monitor lizards, migratory and local birds, insects and mammals such as monkeys, wild boars and otters. There, the tide allows the formation of mudflats where trees grow, with a complex system of roots that shoot out of the mud and become a haven for many aquatic species which find there shelter to breed and feed their offspring. In order to protect the habitats of all of these aquatic species, and disallow a disruption to the natural food chains here, there is a constant need for the conservation of these mangroves.

Removing mangroves for the purposes of retrieving forest products is also becoming more common, as within mangroves could be found pharmaceutical products, dyes, fruits and honey. In terms of removing such valuable products as medicine and so forth, the removal of mangroves could be justified as these could have a greater impact on human-kind than conserving the actual mangroves. But is it worth taking the chance in clearing mangrove ecosystems for this purpose when no benefits may arise?

I have realised the huge importance of mangrove ecosystems, and when weighing up the benefits of conserving them as opposed to the benefits or removing them I think many times it depends on the countries economic position and whether it can afford to remove or conserve them. Conserving mangroves could be hugely expensive, whereas removing them could be hugely profitable. To conclude I feel that seeing as mangroves have such a high biological and genetic diversity and uniqueness which cannot be found anywhere else, and so many food-chains and species depend on them, conserving them would be most beneficial to both us and a variety of different species in the long term.