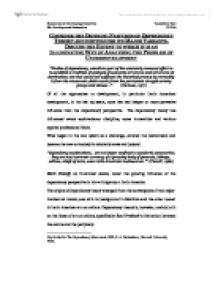 Consider the Defining Features of Dependency Theory and distinguish its Major Variants. Discuss the Extent to which it is an Illuminating Way of Analysing the Problem of Underdevelopment.

CONSIDER THE DEFINING FEATURES OF DEPENDENCY THEORY AND DISTINGUISH ITS MAJOR VARIANTS. DISCUSS THE EXTENT TO WHICH IT IS AN ILLUMINATING WAY OF ANALYSING THE PROBLEM OF UNDERDEVELOPMENT "Studies of dependency, constitute part of the constantly renewed effort to re-establish a tradition of analysis of economic structures and structures of domination; one that would not suffocate the historical process by removing it from the movement which results from the permanent struggle among groups and classes..."1 (Cardoso, 1977) Of all the approaches to development, in particular Latin American development, in the last 25 years, none has had deeper or more pervasive influence than the dependency perspective. The dependency theory has influenced every social-science discipline, some humanities and various applied professional fields. What began in the late 1960's as a challenge, entered the mainstream and became the new orthodoxy in scholarly areas and beyond. "dependency explanations... are no longer confined to academic sanctuaries; they are now common currency of a growing body of generals, bishops, editors, chiefs of state, even Latin American businessmen."2 (Falcoff, 1980) Mark Falcoff, as illustrated above, noted the growing influence of the dependency perspective in his writings about Latin America. The origins of dependency theory emerged from the convergence of two major intellectual trends; one with its background in Marxism and the other rooted in Latin American structuralism. Dependency theory is, however, mainly built on the ideas of structuralists, specifically Raul Prebisch's distinction between the centre and the periphery. In this distinction, the centre was seen as the cause and the periphery as the effect. ...read more.

Surplus extraction is the mechanism of its own perpetuation. As capital accumulation is being drained away from the periphery, it creates an increasing dependence on the centre for flows of foreign capital and technology. Secondly, technological dependency, which is brought about by the absence of an indigenous capacity in the periphery. Dos Santos sees technological dependence as the key to the dependency situation and also the key to escaping from the situation of dependency. Only with a fully developed capital goods sector, can the periphery require an indigenous technological capacity for self-sufficient expansion. If a dependent peripheral economy can establish a high degree of productive autonomy, by developing an important capital goods sector in the economy. Then, it is argued that foreign capital will lose its capacity to determine the character of peripheral development. However, surplus extraction through multinationals, prevents this development of the capital goods sector. Therefore, we end up with industrial stagnation of the periphery, but this is also due to many other reasons, including, failure to carry out land reform and failure to change the distribution of income, to name a few. Finally, the powerful presence of multinationals in the periphery. Both surplus extraction and technological dependence, are factors that derive from the presence of multinationals. Multinationals would be negatively affected by full-integrated industrialisation of the periphery, according to dependency writers. So, the multinationals must come up with a way to prevent this industrialisation form occurring. Exports of a wide range of particular capital goods are also essential for the prevailing dominance of the centre, so steps must be taken to ensure that peripheral industrialisation does not occur. ...read more.

The situation of underdevelopment came about when commercial capitalism and then industrial capitalism expanded and linked to the world market non-industrial economies that went on to occupy different positions in the overall structure of the capitalist system. Therefore, a difference exists among the developed and under-developed economies, not only of the stage and the state of the production system, but also of the function and position within the international economic structure of production and distribution. The concept of underdevelopment refers to a type of economic system with a predominant primary sector, a high concentration of income, little diversification in its production system and overall, an external market far outweighing the internal market. Dependency theory illustrates many important ideas and provides relevant analysis to the problem of underdevelopment. It explains the emergence of underdevelopment and seeks to provide an explanation for it. Dependency theory highlights how the peripheral economies can overcome the situation of dependency, as a result of underdevelopment. Even though the peripheral countries are 'restricted' in their own development, in that, they must wait for the centre economies to fully develop, before they can begin to reduce their dependency on the them and develop themselves. We can see that the dependency theory does provide us with some explanation and solution of the problem of underdevelopment. Regardless of the fact that in a practical setting, for the periphery to overcome underdevelopment, it is a long process, that is relies on the development of the centre, for it's own expansion. CONSIDER THE DEFINING FEATURES OF DEPENDENCY THEORY AND DISTINGUISH ITS MAJOR VARIANTS. DISCUSS THE EXTENT TO WHICH IT IS AN ILLUMINATING WAY OF ANALYSING THE PROBLEM OF UNDERDEVELOPMENT. ...read more.