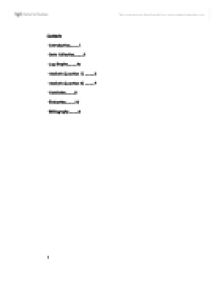 Construct two Graphic Log Sections, one on the eastern exposure (ST 3375 6645) and one at the western exposure (ST 3245 6605) of the Carboniferous Limestones and volcanic rock exposed in the low, coastal cliffs - compare the two.

Contents -Introduction............1 -Data Collection............2 -Log Graphs............2a -Analysis (Location 1) ............3 -Analysis (Location 2) ............4 -Conclusion............8 -Evaluation............10 -Bibliography............8 Geology Bath and Bristol Coursework Introduction From the 1st-4th July we studied a geological area based around parts of Somerset, around Bath and Bristol areas. One specific site that we studied was Sand Bay, north of Weston-Super-Mere, (ST 3305 6596, which is located on the map above. The purpose of this investigation was to construct two Graphic Log Sections, one on the eastern exposure (ST 3375 6645) and one at the western exposure (ST 3245 6605) of the Carboniferous Limestones and volcanic rock exposed in the low, coastal cliffs. Then to compare the two graphic logs (similarities and differences) and interpret the geological condtions that led to the formation of the sequences observed. In South Wales and the South-West of England in the Lower Carboniferous times, several hundreds of metres of limestone and calcareous mudstones passed southwards into a deformed sequence. A shallow south sea in the north bordered a deeper marine area to the south that revealed limited supplies of course sediment, in which was some volcanic activity. Data Collection We collected data from two locations. We had to predict if there was volcanic activity present in the area in the Carboniferous times and if so where was it in relation to the two locations. This was done by studying the beds and what was in them internally. We collected our data in groups, which has its advantages and disadvantages. For example we completed the work quickly, we had many people looking at the same thing making our descriptions more detailed and we could also discuss each type of rock with each other. A disadvantage could be that everyone will get to work out dips, strikes and measuring so will not learn practical fieldwork. Data How it was Collected Problems Dip and Strike The instrument that we used to measure the dip and strike of each bed was called compass clinometers. ...read more.

The minerals eg calcite or quartz are derived from fluids and are deposited in faults or fractures. See figure 2 8 Bioclastic limestone, dark grey and fine to course in grain size. Laminations, fragments of shell and jointing. Larger grain sizes and fragments of shell in limestone shows near a reef. Lamination also can be caused by flash floods could be in shallow water. 9 Tuff, fine to course grain size and buff in colour. Bryozoan, 5cm limestone bed within main bed, calcite veins also present. Variation of grains in tuff -near volcano. Bryozoan which are marine type creatures that can live at a range of depths, from tide to abyssal. The organism's skeleton may be calcium carbonate that could describe the calcite veins present. 10 Limestone, dark grey, very fine (hard rock). Banded tuff, fossils such as crinoids and bryozoans. Lipilli, jointing and calcite veins as well. Lipilli, which is ejected from volcanoes, is found here suggesting it must have been near the site (fairly large structure). Jointing indicates that the surface could have moved and crinoids and bryozoans found as fossils could indicate that the bed was near a reef. 11 Tuff, red in colour, fine grained and softish. Includes calcite a vein, also rock is weathered. Tuff from a volcano, weather could mean that the rock had been left for some time. Calcite veins, precipitation of calcite from eg an organism. 12 Tuff, medium-course and grey. Too weathered to tell sedimentary structures, but there is bioturbation. Medium to course grained tuff, closer to the volcano. Another bed that could have been exposed for some time. Bioturbation, creatures living in the environment. 13 Limestone, fine, medium grained, grey/buff colour. Calcite veins Calcite veins formed from hydrothermal solutions at a range of temperatures and pressures. The minerals eg calcite or quartz are derived from fluids and are deposited in faults or fractures. 14 Limestone, mud, soft sandstone. ...read more.

Slickensides are parallel striations on rock surfaces produced by relative motion across opposite sides of fault planes (suggest a phase of early reverse movement was followed by normal brittle fault movement). I don't think this really affected my final conclusion, however, because that was the only one I saw in both the locations, maybe further on there would be more evidence of them. I think my data was as accurate as possible. As I did all the dip and strike, I repeated them all the same. However, I could have repeated them a second time to find out the average dip and strike. I could have been more accurate in how the fossils were placed in the bed. For example the percentage amount in which they took up, if there were a few grouped together and well-preserved then it could be exceptional preservation, conservation. I think my data is fairly reliable. If I were to go back to the same location I would probably gather the same information. The dips and strikes could vary a little because of the different place I would take them from. The limitations of the techniques used included bumpy surfaces where we might have no t got the right measurements. Not enough measurements where we could have taken an average on our findings. This would have made it more reliable. On the first day at Location One the weather was fairly cold and sometimes drizzly. This could affect our results by rushing them and not measuring or looking at the beds correctly. If I had the chance to change my investigation I would make the techniques I used better. For example making my results more accurate, repeating them to make sure they are the same. Also better logging techniques, maybe recording my about the structure of the beds. If I were to extend my study I would repeat the measurements making them more accurate. I would also include more locations to find out where the volcano did actually sit in the Somerset countryside. ...read more.