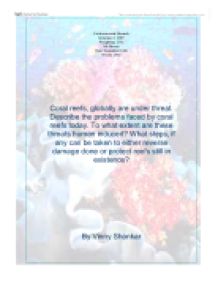 Coral reefs, globally are under threat. Describe the problems faced by coral reefs today. To what extent are these threats human induced? What steps, if any can be taken to either reverse damage done or protect reefs still in existence?

Environmental Hazards Semester 2, 2007 Weighting: 25% Mr Brown Due: September 14th Words: 2865 Coral reefs, globally are under threat. Describe the problems faced by coral reefs today. To what extent are these threats human induced? What steps, if any can be taken to either reverse damage done or protect reefs still in existence? By Vinny Shankar Coral reefs are one of the most highly productive ecosystems in the world, with a complex ecology home to thousands of symbiotic plant, animal and bacteria species. Although they are highly productive, they are also an endangered ecosystem with the majority of threats brought about as a result of human activities or actions. Coral reef ecosystems provide an important resource, not just because of their biological diversity and productivity, but also towards the development of tourism, and the positive economical impact they have on tropical coastal nations. Coral reefs form when colonies of coral polyps (small aquatic animals with a tube-shaped body and a mouth surrounded by tentacles http://216.168.47.67/cis-fishnet/Crest/CRD.htm) join together in large colonies (refer figure 1.0.) Coral reefs are divided into two categories, hard coral and soft coral. Hard coral: this is was forms the hard solid structure that forms the reef base. It is formed from the calcareous base that the polyps secrete. The process is slow and on an average coral grows at about 1-2 mm a year, meaning it takes thousands of years for a substantial piece of coral to come about. Soft coral: do not have skeletons, and feed by swaying in the water. They look like plants and provide homes to many small marine animals. There are three different types of coral reefs: Fringing reef: Grows in shallow water along the shore and prefers arid climates with limited river runoff. ...read more.

This would have a devastating impact on the diversity because a complete habitat would be lost - 22% of global reef area is affected by pollution like this. * Cyanide Poisoning: The fisherman squirts the cyanide in and around the reefs to get to the fish and temporarily paralyse them. However, the cyanide poison floats around and kills the smaller reef fish as well as the small coral animals, and thus the coral reefs die. * Trawling: Trawling is a method of fishing using a chain, and a big net which is dragged along the ocean floor, pulling up everything in its path, leaving the once vibrant reef ecosystem looking like somewhat of an underwater desert. Further to these problems overfishing has a substantial effect on coral reefs and the marine ecosystem. Fishing with dynamite, cyanide or bleach has killed coral reefs in the Indo-Pacific region. Between 1986 and 1991, half of the coral reefs in the Philippines have been demolished by these and other destructive fishing methods. Since the 1960's, thousands of fishermen in Asia and Indonesia have been using dynamite fishing to collect live fish for money. It is a quick and easy way to catch fish because once the dynamite explodes, the fish nearby are stunned and float to the top where they can be caught. However, the dynamite severely damages the coral reefs and affects the biodiversity because, as mentioned earlier, the community is symbiotic and so if parts of the reef are killed, all the algae and polyp will die. Over fishing in places like the Philippines and Indonesia has caused the disappearance of many types of fish from entire areas. ...read more.

This would cause a loss of a tourist attraction which would in term affect Palau's economic activity. It would also mean the loss of an ecosystem which leads to the loss of many organisms that survived in it, and also food resources. Management needs to occur to try and reduce the rate at which global warming is affecting the world. Management strategies (at all scales) should be in place to try and decrease the rate at which global warming is occurring. As all islands of Palau are different, individual management strategies need to be enforced to suit each need. If management strategies aren't used at a variety of scales it will result in the destruction of fragile ecosystems all over the world. Conclusion Coral reefs are ecologically and economically one of the most important ecosystems in the world. They provide millions of jobs both directly and indirectly and are home to millions of species of plants and animals. Urbanisation and tourism is a big part of the problem of the diminishing coral reef population worldwide and thus many of the problems concerning coral reefs are human induced. Activities such as construction on shorelines, pollution, deforestation and aquaculture are all damaging the fragile coral reef ecosystem. The coral reefs are vital in attracting tourists to coastal nations. Many tourists enjoy the beauty of coral reefs and if this fragile resource were to be gone from our seas not only would the environment severely suffer but also the tourism industry. There are quite a few steps in place to curb the decline and the destruction of the Coral reefs worldwide; in order to keep both the coral alive and a flourishing tourism sector, there needs to be consistent management of the fragile ecosystem in order to preserve this beautiful and vital resource for generation to come. ...read more.