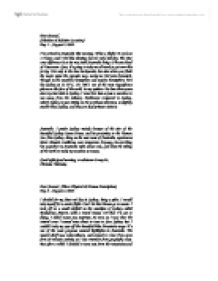 Dear Journal, (Absolute & Relative Location) Day 1 - August 2, 2005. I've arrived in Australia this morning. What a flight! It took me 11 hours, and I feel like sleeping but it's only mid-day. The time zone difference is at its max with Australia being 19 hours ahead of Vancouver. Geez, it's going to take me all week to get over this jet lag. Not only is the time backwards, but also when you flush the water spins the opposite way, makes me feel sorta homesick. Though in the southern hemisphere and eastern hemisphere, here lies Sydney at 33 55�S, 151 10E�, one of the most magnificent places on the face of the earth, in my opinion. Its been three years since my last visit to Sydney, I came here last as just a vacation to run away from the ordinary. Melbourne compared to Sydney, which Sydney is just 600km in the northeast direction, is slightly smaller than Sydney, and they are dual primate cities in Australia. I prefer Sydney mainly because of the site of the beautiful Sydney Opera House, and its proximity to the Tasmen Sea. Also Sydney, being on the east coast of Australia, experiences better climatic conditions, more temperate. Anyway, its scorching hot anywhere in Australia right about now, god bless the tilting of the earth to make my vacation so toasty. Good night/good morning, or whatever it may be, Christine Yablonka Dear Journal, (Place: Physical & Human Description) Day 2 - August 3, 2005. ...read more.

I arrived at my hotel in the CBD of Sydney, called (this is an original name) Sydney Hotel, and fell into bed with the Sydney skyline in my mind. Nite, Christine Yablonka Dear Journal, (Human & Environmental Interactions) Day 3 - August 4th, 2005. Even with all the protection and importance placed on the perseverance of nature in Sydney slowly tree by tree, its disappearing. The outback is being destroyed due to its popularity in the tourism industry as more and more people travel through it. Not only are the sandland country being destroyed, but more beaches become public, and become surrounded by highrise hotels, and the neighbouring bushland is destroyed to make room for summer housing. It's a sad prospect I believe, you want to share the beauty with the world, but in the end you just end up destroying it. I always thought that Sydney was perfect city when it comes to the preservation of important green space in the city, or example the Botanical Gardens, and the Ku-ring-gai Chase National Park which contains most of Sydney's northern part, but Sydney has its share of problems as I learned as I visited a museum in the CBD. For example, industrial development in rural areas are contaminating sources of water and food of the surrounding wildlife, and the danger associated with the Great Barrier Reef , which is about 100km north of Sydney, where the largest coral reef in the world is being threatened by an increase of ships, and tourism. ...read more.

There were many ways to choose from as there is extensive railway systems that take people from all the suburbs into the city's downtown, and even a monorail between the CBD and darling harbour, both of these scuttling thousands of workers (number of workers: agriculture 5%, industry 22%, services 73%) everyday to and from work. There are also state operated ferries carrying people from Port Jackson, Manly, North Shore, Circular Quay, and as far west as Parramatta. As for roads and highways in Sydney, you'd be surprise to find that there aren't many. The city has taken a standing to focus away from the use of individual cars, and give money into its growing cheap public transportation. In face the first freeway, and only one, was built in 1968 called Warringah Expressway, and there is only one tunnel built in 1992, only to relieve traffic congestion on the Sydney Harbour Bridge...its called the Sydney Tunnel...they really have inventive names. Transportation to the rural areas aren't really important as 85% of the population lives in the suburbs. Transportation in information is just the same as in Canada, TV, newspapers, word of mouth, and internet (9.47 million people have internet). So taking all this into account I decided to take the train system. The train took me north to Hornby, then around to Parramatta, and back into the CBD. After this adventure I was 2 hours away from my plane departure at Sydney's largest airport, Kingsford Smith International. So I bid farewell to Australia, and the beautiful and informative city of Sydney, New South Wales. Christine Yablonka ...read more.