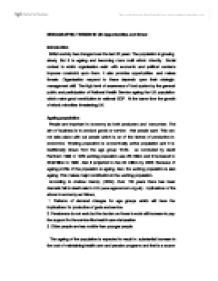 DEMOGRAPHIC TRENDS IN UK-Opportunities and threat Introduction British society has changed over the last 50 years. The population is growing slowly. But it is ageing and becoming more multi ethnic minority. Social context in which organisation exist with economic and political contexts imposes constraint upon them. It also provides opportunities and makes threats. Organisation respond to these depends upon their strategic management skill. The high level of awareness of food system by the general public and participation of National Health Service ageing the UK population which make good contribution to national GDP. At the same time the growth of ethnic minorities threatening UK. Ageing population People are important in economy as both producers and consumers. The aim of business is to produce goods or service that people want. This can not take place with out people which is on of the factors of production in economics. Working population is economically active population and it is traditionally drawn from the age group 16-64. as concluded by david Farnham 1999 In 1979 working population was 26 million and it increased to 28.9million in 1990. Also it projected to rise 30 million by 2006. Because of ageing profile of the population is ageing. Also the working population is also ageing. This makes major contribution in the working population. According to Andrew Harrop, (2004) Over 100 years there has been dramatic fall in death rate in U.K (www.ageconcern.org.uk). ...read more.

And report says 90 per cent of increase in work force is due to women entering into labour market. Increase women employment changes the demands of labour market. David Pierce, (1996) states that at 2006 the working age of men will fall while that for women will increase than the present. Consequently the rate of all people of working age will be up (British economical survey, volume 26 no1 autumn 1996). According to the UK consumer trends reports, 2003 UK disposable income has risen along with rise in dual income families. And it states that 71 per cent of the families in UK having dual income.(online www.usembassy.org.uk). Child birth limits the opportunities of women from gaining promotion, experience and rising to top. There will be an adverse effect if they strive for promotion. Women have the major responsibility for children. The introduction of paternity leave may shift the burden in the future. While the introduction of nursery for all children between 3 and 4 will make easier for women to enter in the labour market. Ethnic minorities Since 1945 migrants have come from former British colonies and have been distinctive because of colour, religion and cultures (David Farnham,1999). Data from 2001 census confirm that Britain has one of the highest rates in the world of inter ethnic relationship and consequently mixed race people. The United Kingdom has one of the fastest growing mixed race populations in the world, fuelled by the continuing rise of inter ethnic relationships. ...read more.

As stated in online www.eoc.org .uk. benefits for the employees in flexible working hours are 1. Extending business opening hours 2. Encouraging employees 3. Attracting wide range of candidates 4. Reducing absenteeism 5. Retaining valued employees 6. An increased employee motivation and productivity Part time employment enables women with family responsibilities to enter paid employment and combine their dual roles. It allows many people those who have different responsibility in the society to be economically active. Single parents Although some choose to be single parents majority find that either be breakdown of relationship, or death of partner. A single parent has to struggle with a tight budget to bring up their children. And also they receive bad press in society. Jill Curtis, (2001) states that UK is the divorce capital of Europe, and more children living with single parents. According to single parent action network 23 per cent of the families with children are single parent, which makes 1.3 million single parents in Britain (Jill Curtis, 2001). More over it says that nine out of ten single parents are mothers. People believe that single parent families are dysfunctional. Most of the single parent families are economically down and there is much possibilities for children to go in wrong path. Many single parents experience financial difficulties that may prevent them from enjoying many activities like vacations or trips to the movies or dinner. Conclusion Due to increase of migrants and population working population is growing which makes good contribution to the national GDP. But the growth of the ethnic minorities threatening UK future. ...read more.