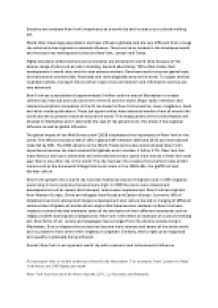 Transfer-Encoding: chunked ﻿Describe and evaluate New York?s importance as a world city and its status as a cultural melting pot. World cities have large populations and have influence globally and are very different from a mega city which only has regional or national influence. They tend to be located in the developed world and the top three ranking world cities are New York, London and Tokyo. Highly educated, skilled workers and universities are attracted to world cities because of the diverse range of jobs such as jobs in banking, law and advertising. TNCs often locate their headquarters in world cities and this also attracts workers. Dominant world cities are global hubs, interconnected commercially, financially and technologically around the world. To supply services to global markets, transport links to other major cities and telecom and information services are very advanced. New York has a population of approximately 8 million and the area of Manhattan is a major commercial, financial and cultural centre of the US and the world. ...read more.

The city has been the creative force behind many artistic scenes such as the Greenwich Village Folk music scene in the 1950s-60s, the graffiti art and hip-hop culture. New York?s growth into a world city has been fuelled by waves of migrants and in 1893 migrants were living in slums and poverty levels were high. In 1909 the slums were cleared and developments such as sewers and transport routes were implemented. New York has migrants from Western Europe, China and refugees from Russia and Eastern Europe. Currently 38% of inhabitants are born abroad and diaspora development and culture has led to merging of different communities. Migrants of similar ethnic origins that have become residents in New York have created a community that maintains some of the attributes of their different homelands such as religious beliefs and linguistic backgrounds. New York is therefore an example of a cultural melting pot. ...read more.

This social structure is supported by sophisticated transport and information systems locate their headquarters within world cities due to the already, well established financial infrastructure such as banking, stock broking and a system of telecommunications. The three major world cities stand out above all other cities as being the location for the majority of the world?s TNC?s. For example, Tokyo is the leader with 80 TNC?s. London follows with 63 and finally New York with 58. World cities hold the infrastructure to accommodate such forms of finance. For example New York is renowned for Wall Street, which is a recognised leader in the world stock market World cities are also areas of major importance in leisure activities such as shopping and fashion. World cities often lead the world through fashion and the selling of exclusive items. Such areas include 13th Avenue in New York In addition, a highly established telecommunications system exists between and within world cities. Such a system is extensively used by world cities to effectively coordinate the roles of world cities, such as finance and banking. ...read more.