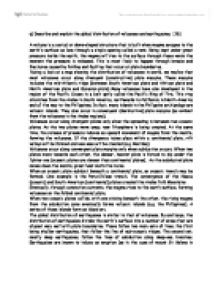 Describe and explain the global distribution of volcanoes and earthquakes.

a) Describe and explain the global distribution of volcanoes and earthquakes. [16] A volcano is a conical or dome-shaped structure that is built when magma escapes to the earth's surface as lava through a single opening called a vent. Being kept under great pressure inside the earth, the magma will rise to the surface through these vents the moment the pressure is released. This is most likely to happen through breaks and fractures caused by folding and faulting that occur at plate boundaries. Taking a look at a map showing the distribution of volcanoes in world, we realise that most volcanoes occur along divergent (constructive) plate margins. These margins includes the mid-Atlantic ridge (between South American plate and African plate and North American plate and Eurasian plate) Many volcanoes have also developed in the region of the Pacific Ocean in a belt aptly called the Pacific Ring of Fire. This ring stretches from the Andes in South America, northwards to California in North America and all the way to the Philippines. In fact, many islands in the Philippine archipelago are volcanic islands. They also occur in convergent (destructive) plate margins (as evident from the volcanoes in the Andes regions). ...read more.

has the highest (70% of the worlds earthquakes) incidences of earthquakes. The belt stretching from the Mediterranean Sea to the Himalayan Mountains, have about 20% of the earth's earthquakes. The rest of the earthquakes occur in diverging plate boundaries such as the Mid-Atlantic ridge as well as transform plate boundaries (San Andreas Fault). Earthquakes occur when the energy that is built up in an area in the earth's crust or upper mantle is suddenly released. When plates converge, the downward movement off the subducting plate is not smooth. Where the plates diverge, and where the plates slip past each other, the movement is also not smooth. The plates get stuck easily by tremendous friction and large amounts of energy build up. Due to this, the rocks are under enormous pressure and stress as the plates stretch or compress them. The stress on the rocks becomes unbearable and it finally causes the rocks to bolt and jerk free into new positions along the fault line. The movement results in a release of stored energy in the form of seismic waves that make the ground vibrate. 698 words b) Using examples explain why volcanic and earthquake activity occurs in areas away from tectonic plate boundaries. ...read more.

Such earthquakes are often associated with extensional faulting deep in the crust, where continental rifting may be at its early stages. An example is the New Madrid Fault, which gave rise in the 1810s to a series of huge earthquakes in the region of New Madrid, Missouri, USA. In 1886, a major intra-plate earthquake struck Charleston, South Carolina. Smaller earthquakes can also occur on old faults in plate interiors. The British Isles, which are located well away from any plate boundary, experience minor earthquakes of this sort from time to time. One occurred in 1990 in Shropshire County, and was felt as far away as London, which was about 100 kilometres away. Earthquakes are also associated with volcanic activity. As magma rises through the plumbing system of a volcano, it forces its way up by exploiting lines of weakness in the crust, opening up cracks and fissures, and this frequently gives rise to swarms of earthquakes as the pressure is released. It was, for example, one such earthquake that triggered the explosive eruption of Mount St. Helens in 1980, because the earthquake caused the mountainside to give way, releasing the pressure on the magma chamber inside the volcano. 531 words 1259 words ...read more.