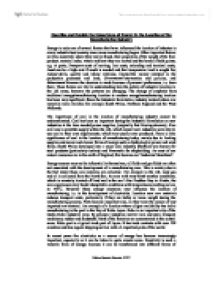 Describe and Explain the Importance of Energy in the Location of the Manufacturing Industry.

Describe and Explain the Importance of Energy in the Location of the Manufacturing Industry Energy is only one of several factors that have influenced the location of industry in every industrialised country since mass manufacturing began. Other important factors are Raw materials-where they can be found, their proportion of the weight of the final product, material index, where and how they are moved and the break of bulk points, e.g. at ports; Transport-costs of moving, line costs, unloading and terminal costs; Land-can be a high cost if much is needed and that inexpensive land is sought for; Labour-skills, quality and labour relations; Capital-the money invested in the production processes and land; Government-intervention and policies; and Behavioural Reasons-the decision is made because of personal preferences, i.e. born there. These factors are vital to understanding how the pattern of industrial location in the UK arose; however the patterns are changing. The change of emphasis from traditional energy/manufacturing location to modern energy/manufacturing location has been very significant. Since the Industrial Revolution, industry located where raw materials were available for example South Wales, Northern England and the West Midlands. The importance of coal in the location of manufacturing industry cannot be underestimated. ...read more.

Its principal industries involve iron and steel, transport machinery, rubber and foodstuffs. Most of the factories are concentrated in the coastal areas. Kobe port is a typical trade port of Japan. It has trade contacts with over 120 countries and has regular shipping service with all-important ports of the world. In recent years the electricity as a source of energy has become increasingly important, especially as it can be taken to quite remote areas. Electricity is such a versatile form of energy, because it can be transformed into different forms of chemical energy and also as it can be transported effectively and efficiently via the National Grid (cables and pylons) as it has many connections from a national, regional to a local basis. The part played by electricity in the new locations of industry is that there is no real limit to where an industry can develop if it is dependant on electricity. Modern secondary industries are not tied down to their source of raw materials or power and can locate where they like. Local and regional authorities may offer money and other incentives for a firm to locate in their area because they want the jobs and affluence the industry will bring. ...read more.

and the unemployment rates are quite high in the city, meaning that there is a ready workforce; land costs are lower than the south of England and Brownfield sites close to city centre which allows for space for expansion. Furthermore the City Council welcomes new industries because of jobs and wealth the centre will bring. The growth of cities, population distribution and social and employment changes have all been affected by the location of industry. Traditional industry grew during the nineteenth century. It depended on the supply of raw materials and coal for power. These were bulky and expensive to move, so industries located near to where they were found or could be easily imported. However, today many of the UK's raw materials have either depleted, like iron ore, or are imported from overseas. Many heavy industries therefore using bulky raw materials from abroad, for example steel, oil and chemical industries have developed at the nearest source, i.e. at the coast at ports. Also the resource electricity has meant that industry can go to a much wider selection of locations and the main issues that now need to be considered are reliability, cost and environmental considerations. Fabina Nazmin Hussain 13YY ...read more.