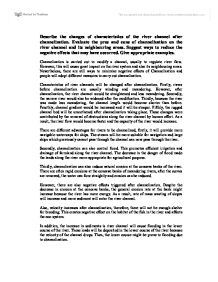 Channelization is carried out to modify a channel, usually to regulate river flow. However, this will cause great impact on the river system and also its neighbouring areas. Nevertheless, there are still ways to minimize negative effects of Channelization and people will adopt different measures to carry out channelization.

There are different advantages for rivers to be channelized, firstly, it will provide more navigable waterways for ships. The stream will be more suitable for navigation and large ships which previously cannot pass through the channel can now pass through the river.

Secondly, channelization can also control flood. This promotes efficient irrigation and drainage of farmland along the river channel. The decrease in the danger of flood made the lands along the river more appropriate for agricultural purpose.

However, there are also negative effects triggered after channelization. Despite the decrease in erosion at the concave banks, the general erosion rate at the bank might increase because the river has more energy. As a result, rate of mass wasting of slopes will increase and more sediment will enter the river channel.

Also, velocity increases after channelization, therefore, there will not be enough shelter for breeding. This creates negative effect on the habitat of the fish in the river and affects the eco-system.

Water table might be lowered in neighbouring areas as a result of channelization. The channel will draw groundwater beneath the adjacent floodplain, groundwater storage will then decrease. As ground water storage decreases, the soil becomes more compacted, reducing capacity of soil to store water.

There are different ways to reduce negative impacts of channelization, one way is to carry out afforestation. By planting more trees, more tree roots are available to hold the soil and help reduce soil erosion at the river bank. With a decreased silting rate, the sand content in the river will decrease the danger of flooding in the lower course could be reduced.

Constructing dams can also minimize negative effects of channelization. A pool would be formed and this will allow river water time to return as ground water storage in neighbouring areas so that water table can rise and the soil would become less compacted.

By placing boulder back to the river channel can reduce negative effects of channelization. These boulders can provide fish with shelter, they can seek breeding ground and resume to their habitat and the ecosystem could be maintained.

In conclusion, channelization as a modification by human effort can help bring positive effects to the channel in theory. But it can only help river channels improve relationship only if certain measures were carried out in order to reduce the negative effects brought along.