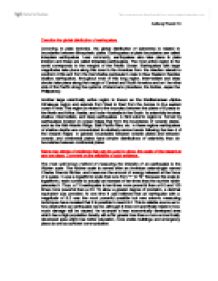 Describe the global distribution of earthquakes.

Describe the global distribution of earthquakes According to plate tectonics, the global distribution of epicentres is related to boundaries between lithospheric plates. Earthquakes at plate boundaries are called interplate earthquakes. Less commonly, earthquakes also take place in plate interiors and these are called intraplate earthquakes. The most active region in the world corresponds to the margins of the Pacific Ocean. Earthquakes with large magnitudes take place along this zone in the Americas from the Aleutian Islands to southern Chile and from the Kamchatka peninsula in Asia to New Zealand. Besides shallow earthquakes, throughout most of this long region, intermediate and deep shocks take place along the margin of Central and South America and on the other side of the Pacific along the systems of island arcs (Aleutians, the Kuriles, Japan the Philippines) Another large seismically active region is known as the Mediterranean-Alpine-Himalayas region and extends from West to East from the Azores to the eastern coast of Asia. This region is related to the boundary between the plates of Eurasia to the North and Africa, Arabia, and India--Australia to the South. Its seismicity involves shallow, intermediate, and deep earthquakes. A third seismic region is formed by earthquakes located on ocean ridges that form the boundaries of oceanic plates, such as the Mid-Atlantic Ridge, East Pacific Rise, etc. ...read more.

In addition, for more than 300,000 survivors in the heavily impacted cities of Kobe, Ashiya, and Nishinomiya who were displaced from their homes, there were the hardships of finding shelter; securing food and water; locating friends and family members; and acquiring warm clothing for the cold, damp winter weather. Although relatives and friends took some of the displaced people in, and others possessed the means to relocate to hotels, those requiring emergency shelter reached a peak of 235,443 on the evening of January 17. Many camped in public parks or assembled makeshift shelters from materials salvaged from the wreckage of their homes. The 1,100 shelters included community centres, schools, and other available and undamaged public buildings. Facilities were too few to avoid severe crowding in some shelters, however, causing sanitation problems and increased risk of communicable disease. Indeed, two weeks after the earthquake, reports of influenza and pneumonia were common. Food, water for drinking and sanitation, blankets, and warm clothing were in short supply for at least the first few days after the earthquake, and many people from the hardest-hit wards made the long walk to the Nishinomiya Railway Station, journeyed to Osaka for necessities, then returned via rail with whatever they were able to transport by hand. ...read more.

Predictions of earthquakes are based largely on past patturns and generally tend to be imprecise. They are usually long term, and as we have seen, in the case of earthquakes it is unlikely that the location and magnitude of an event can be predicted with any accuracy. Forecasts are based on the evolution of an event through a series of stages that are increasingly well understood. In contrast to predictions, forecasts are often short-term and thus offer little time for effective warning to be given. Again little progress has been possible with seismic hazard forecasting. There has been considerable investment into the scientific prediction of earthquakes in areas such as the Kanto and Tokai regions of Japan and in California. In such densely urbanised and technologically complex areas the search for accurate prediction methods clearly justifies research costs. Seismic variations in the San Andreas Fault are well known. The section around the town of Parkfield is currently the site for an ongoing seismic prediction experiment. It appears that slips occur along this section of the fault at fairly regular intervals, averaging out at 22 years. The window of occurrence for the latest slip and earthquake was between1987 and 1993, but no major seismic event has yet occurred. Anthony Plumb 13J ...read more.