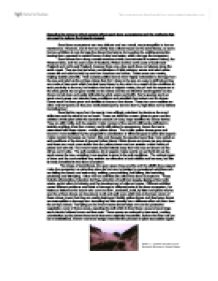 Describe the ways in which people affect sand dune ecosystems and the methods that are used to reduce the impacts caused.

Describe the ways in which people affect sand dune ecosystems and the methods that are used to reduce the impacts caused. Sand dune ecosystems are very delicate and as a result, very susceptible to human interference. However, not all human activity has a direct impact on the sand dunes, as some human activities do not damage the dunes themselves but weaken the existing protection leaving them exposed to natural forces of wind and water, which damage the ecosystem. Sand dunes form along coastal stretches mainly concentrated in western Ireland, the Western Isles, and the east coast of Scotland, Wales and the north coast of south-west England and north-east England, however there are a few sand dune complexes along the south coast. They are formed when combinations of tidal patterns, waves and wind action cause silt and sand to build up and form beaches and dunes. These areas are marshy, helping sustain plant life. Their coastal position leaves them highly vulnerable to damage from the sea and wind as the embryo dunes that form close to the sea are easy to shift given they are made of lose sand which has just been blown by the wind. As a result of the conditions in such proximity to the sea, for instance the lack of organic matter, the pH and the exposure to the wind, plants do not grow readily on the dunes and do not bind the sand together so the dunes remain lose and easily shift-able by wind, water and traffic. ...read more.

Other non-recreational human activities also affect the dunes. Afforestation has been initiated in some areas to prevent the movement of mobile sand but at the same time affected the ecosystems in the areas by disrupting the natural progression of vegetation. This destroys the unique properties of the ecosystem. Overgrazing by domestic stock reduces the vegetation cover of the area leaving it susceptible to blow-outs. Intensive farming either on the dunes or in the surrounding areas introduces fertilisers and drainage applications, which reduces the plant and animal diversity through soil compaction and nutrient enrichment. This again destroys the unique properties of the complex. Direct removal of sand from the beach or the dunes themselves reduces the sand available for the continuous evolution of the dune complex, impairing the ability to create and expand existing dunes and also directly destroying some of the sandier, less mature dunes. Other coastal stabilisation activities such as the addition of groynes further up the shoe affects the sediment supply available, which has the same affect, although rarely causes dunes to be destroyed. The tipping of domestic waste not only has a visual impact on the complex, but also kills vegetation by restricting light and air or by decaying to become poisonous to the plants or altering the pH of the soil. This reduces the vegetation cover leaving the area weakened and more likely to become a blow-out. Tipping of domestic waste also causes the addition of extra weight on the sand resulting in soil compaction making it harder for plants to grow. ...read more.

The damage is corrected by dune reconstruction. An example of dune reconstruction is at Gullane, East Lothian. Here the dune system was used for military vehicle training during World War II. A dune ridge was constructed along the seaward boundary of the area, planted with Lyme Grass (Leymus arenarius) on the seaward side and Marram (Ammophila arenaria) on the landward side. This enclosed a large, relatively dry hollow, effectively a dune slack, which in the early 1980s was still substantially open sand. Marram was planted for stabilisation and the area has become well vegetated. A tarmac path runs down from a carpark to the popular public beach and this is lined with planted Sea Buckthorn which, due to its thorns, has helped keep the public out of the area during recolonisation. As public awareness of the importance of these ecosystems increases, the dune complexes are becoming increasingly more protected. It is important however to try and find a balance between the preservation of the dunes and allowing people access to the area. An example of a well managed sand dune ecosystem is Studland Bay. This can be seen as a successful attempt to manage the impact of humans on an ecosystem, and it should be noted that management itself has an impact, all be it a comparatively positive one. This is the nearest to a perfect solution in the management of sand dune ecosystems and it gives an exemplary outline to how all sand dune complexes should be managed to reduce the impacts of humans on dune ecosystems. ...read more.