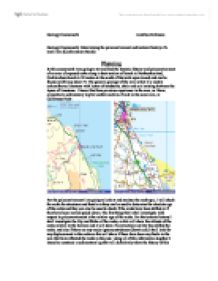 Geology Coursework Jonathan Robinson Geology Coursework: Determining the paleoenviroment and tectonic history of a small area (Cocklawburn Beach) Planning In this coursework I am going to try and find the tectonic history and paleoenviroment of an area of exposed rocks along a short section of beach in Northumberland, Cocklawburn beach is 50 metres to the south of Berwick-upon-tweed and can be found on OS map sheet 75. The general geology of the area is that it is mostly carboniferous limestone with layers of sandstone, shale and coal existing between the layers of limestone. I know this from previous experience in the area, as I have completed a sedimentary log for another section of rock in the same area, at Cullernose Point For the paleoenviroment I am going to look at and analyse the rock type.. I will check the rocks for structures and fossils as they can be used to determine the absolute age of the rocks and they can also be used to check if the rocks have been shifted or if they have been moved upside down. The first thing that I shall investigate with respect to paleoenviroment is the relative age of the rocks. For the tectonic history I shall investigate the Dip and Strike of the rocks, as this will show the attitude of the rocks relative to the horizon and it will show if any tectonic activity has shifted the rocks, and also if there are any major igneous structures (Bowls ect) I shall look for any displacement in the rocks as this will show if there have been any faults in the area that have affected the rocks in the past. Using all of this information together I intend to construct a sedimentary log that will definitively show the history of this small area. To help me find this information I will use my own observations, as well as secondary sources such as the Internet and geology reference books (see bibliography) ...read more.

This layer would have been formed in a shallow swamp, with very little water movement. As plants and other matter died and fell into the water, it would have decayed very slowly and been formed into coal. This picture shows bed 3, 4, 5 and 6, note how thin bed 5 is in relation to the other beds, this shows that the area did not stay as a swamp for very long Bed 6: This bed is 1 metre thick. It is fine sand sized particles and is composed of grey limestone, this fizzes with dilute HCl, and there is evidence of crinoids and trace fossils in the bed. This bed shows a return to deep water, as there are now hardly any sediment deposition, and an increase in carbon deposition leading to the formation of limestone and the fossils. Bed 7:This bed is 1.5 metres thick, it has clay-sized particles. This bed is composed of mudstone and is black in colour. There is a lot of ironstone nodules spread throughout this bed. It is soft and comes apart easily in the hand. There is also evidence of lamination in this bed, which will have been caused by uneven deposition rates over the years in which this bed was formed. This bed will have been formed like bed two, with a shallowing sea leading to a fine sediment deposition Bed 8: This bed has a thickness of 1.5 metres. It is composed of silt size particles and is siltstone, it is grey. This bed is interbedded with shale and there are iron stone concretions throughout it. This bed shows numerous fossils, with Trace fossils roots and also a lot of sedimentary features, such as cross lamination and normal laminations, these will have been formed due to different current directions and also due to different amounts of deposition during the years the bed was formed. ...read more.

This evidence shows that there has been a major force acting on the coast in the past, forming these features, and that it was acting in a northeast/southwest direction, with more force from the northeast. This hypothesis is backed up by the evidence that I have collected on my sedimentary log. This is a photo of the asymmetrical fold that was at location one on the base map. Note the thrust which pushes one side of the fold over, the right side of this photo is the north-east. This photo shows the folding that has occurred in the first bed on the log. Once again, the right side of this photo is pointing to the north east, which shows the tectonic forces to be northeast/southwest Evaluating Evidence and Procedures I think that the techniques used to collect this data was the most reliable ones that I could use practically in the field. However, I have noted the limitations of the techniques that I have used. The sedimentary log only shows features which can be seen on the surface on the rock, there could have been fossils or features buried in the rock, which I cannot include in my study. The dip and strike measurements that I have taken, as well as the measurements for the thickness of the beds can only be as accurate as the things I used to measure them. This means there will be an error built in to the measurements, as well as human error. The statistical analysis techniques that I have used could also contain error (the rose diagram), however, I believe that have minimised the error by making measurements as accurate I could in the field. I believe that the conclusions I have drawn from the evidence I have collected is true, however there could have been forces at work that I was not aware of, and some of my conclusions could be wrong due to this fact. ...read more.