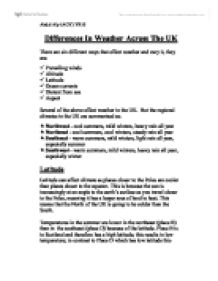 Differences In Weather Across The UK

Differences In Weather Across The UK There are six different ways that effect weather and vary it, they are: * Prevailing winds * Altitude * Latitude * Ocean currents * Distant from sea * Aspect Several of the above effect weather in the UK. But the regional climates in the UK are summarised as: * Northwest - cool summers, mild winters, heavy rain all year * Northeast - cool summers, cool winters, steady rain all year * Southeast - warm summers, mild winters, light rain all year, especially summer * Southwest - warm summers, mild winters, heavy rain all year, especially winter Latitude Latitude can affect climate as places closer to the Poles are cooler than places closer to the equator. This is because the sun is increasingly at an angle to the earth's surface as you travel closer to the Poles, meaning it has a larger area of land to heat. ...read more.

Place E is going to be a lot cooler because it is on the receiving end of arctic winds which are extremely cold unlike place C which receives tropical winds which are warmer. Winds will bring warm temperatures if they have passed over warm surfaces and vice versa this is why place E is cooler, the winds coming to it are from the arctic which is extremely cold compared to the tropics. How prevailing winds effect the UK Types Of Rainfall There are three types of rainfall that occur in the UK. They are: > Convectional rainfall > Relief rainfall > Frontal rainfall Relief rainfall is common in the west of Britain; and that is the reason why the west (place C) receives more rainfall than the east (place D). ...read more.

They occur in the summer or after a hot period because it takes time for the seas and rivers to heat up and then water evaporates. 1 - The sun provides the heat source, heating up the ground quickly. 2 - The ground then heats up the air through convection and the air rises very quickly, carrying any evaporated water with it. 3 - As the air rises it cools very rapidly. 4 - Large clouds develop directly above the rising air as the air cannot hold as much water. 5 - Torrential rain and thunderstorms are caused when the air is cooled to such as degree that water droplets collide with each other in the clouds very quickly. Eventually, the individual droplets become so heavy, the air cannot hold them and they fall as rain. ?? ?? ?? ?? Abdul Aly (AGY) YR10 ...read more.