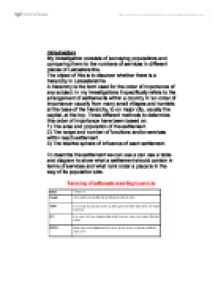 Discover whether there is a hierarchy in Leicestershire.

Introduction My investigation consists of surveying populations and comparing them to the numbers of services in different places of Leicestershire. The object of this is to discover whether there is a hierarchy in Leicestershire. A hierarchy is the term used for the order of importance of any subject. In my investigations it specifically refers to the arrangement of settlements within a country in 'an order of importance- usually from many small villages and hamlets at the base of the hierarchy, to on major city, usually the capital, at the top. Three different methods to determine this order of importance have been based on: 1) The area and population of the settlement. 2) The range and number of functions and/or services within reach settlement. 3) The relative sphere of influence of each settlement. To describe the settlement we can use a can use a table and diagram to show what a settlement should contain in terms of services and what rank order a place is in the way of its population size. Hierarchy of settlements according to population size However this is only the statement of a geographer named Mr.Christaller, therefore he has based his hierarchy on what he has found throughout the places he has visited on average. Therefore I will base my theories on what I should find about Leicestershire on this, however only when I have completed my survey can I produce my own hierarchy. So when I have produced my own hierarchy I will see whether Mr.Christaller's hierarchy matches mine. On the other hand I cannot produce an accurate table because nobody can strictly define what a city, town, village, or hamlet is; but we can define a city, and it's only if there is a cathedral. ...read more.