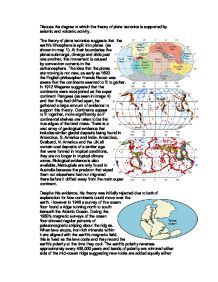 Discuss the degree to which the theory of plate tectonics is supported by seismic and volcanic activity. The theory of plate tectonics suggests that the earth's lithosphere is split into plates (as shown in map 1). At their boundaries the plates submerge, diverge and slide past one another, this movement is caused by convection currents in the asthenosphere. The idea that the plates are moving is not new, as early as 1620 the English philosopher Francis Bacon was aware that the continents seemed to fit together. In 1912 Wegener suggested that the continents were once joined as the super continent Pangaea (as seen in image 4) and that they had drifted apart, he gathered a large amount of evidence to support this theory. Continents appear to fit together, more significantly so if continental shelves are taken to be the true edges of the land mass. There is a vast array of geological evidence that includes similar glacial deposits being found in Antarctica, S. America and India. Antarctica, Svalbard, N. America and the UK all contain coal deposits of a similar age that were formed in tropical conditions, they are no longer in tropical climate zones. Biological evidence is also available, Marsupials are only found in Australia because the predator that wiped them out elsewhere had not migrated there before it drifted away from the main super continent. ...read more.

On the other hand, not all volcanoes are found at plate boundaries (as can be seen in map 2 above). For example, Hawaiian islands which are completely volcanic in their origin, were formed in the middle of the Pacific Ocean, at least 3,200 km from the nearest plate boundary. It is believed that these islands were created as the plate moved over a hot spot. Hot spots seem to be stationary and are thought, by some geologists, to be caused by plumes of magma originating deep within the mantle, others believe they occur at much less depth, and are moving slowly. Another hypothesis suggests that the volcanic activity is not caused by the temperature but by a certain level of thinning in the lithosphere due to its extension, that allows the rising of melt from shallow depths. As volcanic material erupts through the oceanic crust, over time it may build up to form an island. These islands will however, become part of the plate and gradually move away from the heat source. New volcanoes will form over the hot spot, and a new island is created, this can lead to an island chain, if the plate is moving in one direction over the hot spot such as the Hawaiian chain (an illustration of how such a chain might occur can be found above in figure 6). ...read more.

Like volcanoes, it is also possible for earthquakes to occur away from plate boundaries. Where plate boundaries occur within continental crust, faults are spread out over a much larger area than the plate boundary itself. In the case of the San Andreas Fault, many earthquakes occur away from the plate boundary and are related to strains developed some distance away, caused by major irregularities in the fault. Far from plate boundaries complex strata can result in deep fault zones which can result in earthquakes in apparently stable regions. Earthquakes in China and central Asia occur along lines of weakness, related to the collision of India with the Eurasian plate over 50 million years ago. Ninety percent of all earthquakes occur along plate margins and by far the greater amount of energy released as seismic waves comes from subduction zones. Furthermore, the depths of earthquakes are consistent with the idea of oceanic recycling by subduction and sea-floor spreading. The 10 percent of earthquakes that do not occur at plate boundaries are sufficiently explained by extended lines of weakness and the theory of their cause is sufficiently supported by necessary evidence. The majority of volcanoes also occur at plate boundaries, due mainly to subduction of an oceanic plate, but those that do not, are adequately explained by the presence of hot spots. In conclusion, though not strictly located at plate margins, the distribution of volcanic and seismic activity across the globe supports the theory of plate tectonics. ...read more.

This is an excellent answer for an A level student. The author has a sound understanding of the topic, and has an awareness of what the question requires. Use of technical terms is generally very good, and relevant examples are well-explained. In a few places a little more explanation would improve the answer. Overall worth *****