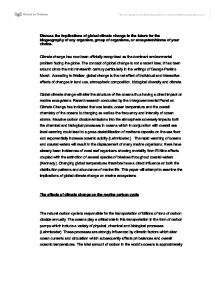 Discuss the implications of global climate change in the future for the biogeography of any organism, group of organisms, or ecosystem/biome of your choice.

Discuss the implications of global climate change in the future for the biogeography of any organism, group of organisms, or ecosystem/biome of your choice. Climate change has now been officially recognized as the dominant environmental problem facing the globe. The concept of global change is not a recent idea; it has been around since the mid nineteenth century particularly in the writings of George Perkins Marsh. According to Walker, global change is the net effect of individual and interactive effects of changes in land use, atmospheric composition, biological diversity and climate. Global climate change will alter the structure of the oceans thus having a direct impact on marine ecosystems. Recent research conducted by the Intergovernmental Panel on Climate Change has indicated that sea levels, ocean temperature and the overall chemistry of the oceans is changing as well as the frequency and intensity of ocean storms. Massive carbon dioxide emissions into the atmosphere adversely impacts both the chemical and biological processes in oceans which in conjunction with overall ...read more.

These processes are strongly influenced by climatic factors which alter ocean currents and circulation which subsequently affects ph balances and overall oceanic temperatures. The total amount of carbon in the world's oceans is approximately fifty times greater than the amount in the atmosphere. The high solubility of the world's oceans means that they form a major sink for anthropogenic carbon dioxide (Prentice et al). Carbon dioxide solubility is very dependent on temperature. Net cooling tends to drive carbon dioxide uptake whereas net warming tends to drive outgassing (Prentice et al). Effects on marine organisms and ecosystems These changes have varying effects on the abiotic and biological functioning of many marine organisms. There is already widespread evidence of the destruction that both natural and anthropogenic climate change is having on marine ecosystems which can be seen in the rapidly diminishing global fish yields and large-scale reductions in coral reef sizes. ...read more.

Increased oceanic acidification also negatively affects the growth of coral reefs and other marine organisms and communities. A similar process to the dissolution of carbon dioxide in sea water occurs in marine organisms, carbon dioxide diffuses through the cell membranes into the blood which disturbs the natural acid-base balance within the organism. The organism therefore has to account for these disturbances and attempt to compensate, however, this ability varies and depends on the genetically determined efficiency of various mechanisms of pH and ion regulation within the organsim (). Despite this, these alterations within the tissue fluid and blood have permanent repercussions for organisms which subsequently affects growth rates, reproductive capacity and in some cases, survival. The current levels of oceanic carbonic dioxide and the rate of increase is the highest ever recorded in the evolutionary history of the past twenty million years. Therefore, it is difficult to ascertain as to how effectively marine fauna can adapt to such an increase over extended periods of time (Lehrnkoster). ...read more.