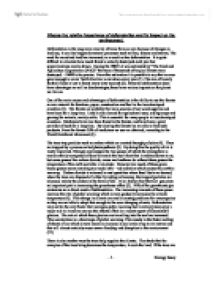 Discuss the relative importance of deforestation and its impact on the environment.

Discuss the relative importance of deforestation and its impact on the environment. Deforestation is the long-term removal of trees from an area because of changes in land use, it can also happen by natural processes such as fires, disease and storms. The need for wood and land has increased, as a result so has deforestation. It is quite difficult to calculate how much forest is actually destroyed each year but approximations can be drawn. During the 1980's it was estimated by "The Food and Agriculture Organization (FAO)" that tens of thousands of tropical forests were destroyed - 53000 to be precise. Form this estimation it is possible to say that an area great enough to cover North Carolina is cut down every year (1). The size of twenty football fields is lost in forest every sixty seconds (2). However deforestation does have advantages as well as disadvantages; these have various impacts on the planet we live on. One of the main causes and advantages of deforestation is the ability to use the forests as raw material for furniture, paper, construction and fuel in the less developed countries (3). ...read more.

When the trees draw up water via their roots they release this water by the process of transpiration back into the atmosphere (2). This release of water creates clouds and provides an alternative form of protection to the earth from the sun's constant attack of heat (4). As water is not re-used but is moved to larger bodies of water like the ocean, precipitation levels are also decreased (7). Removing forests creates areas of land that cannot contain as much water as before resulting in a drier climate. Between the 1950's and 1980's in the north and north-western parts of China where much deforestation is taking place the average annual volume of rain declined by one third. However not all the water is returned this way; some rain water is stopped by the canopies of trees, of which it is evaporated retuning to the atmosphere (5). The loss of these canopies results in the loss of surface area for evaporation to take place. In conjunction with the hydrological cycle, soil erosion is another major disadvantage of continual degradation of forest. The removal of vegetation in large volumes means the soil is exposed. ...read more.

They believe wild animals are leaving their natural habitats and endeavouring into cities as a direct result of deforestation (8). Giant pandas, tigers, gorillas and rhinos all face extinction if we're not careful, and these are just a few of the animals that do face extinction (9). Another cause for concern about the decreasing numbers of trees is that trees are one of the largest producers of oxygen gas. Oxygen is the gas humans breathe and so do numerous other species, if we cut down the producers of oxygen then we are also reducing the amount of oxygen we have to live on. It is not possible to say if deforestation is completely correct or incorrect. It has valuables advantages and disadvantages; however at this present time the disadvantages seem to be outweighing the good factors of deforestation. We must try and balance the needs of the environment and the needs of the man kind. Right now deforestation is occurring without sufficient reforestation. We need to promote sustainable development; balancing the need for development and growth against the need to protect the natural environment. This is the outlook for the future. ...read more.