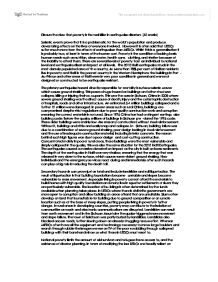 Discuss the view that poverty is the real killer in earthquake disasters. (40 marks)

Seismic events prove that it is a problematic for the world’s population and produce devastating effects on the lives of everyone involved. However it is often said that LEDCs suffer much more from the effects of earthquakes than MEDCs. Whilst this is a generalisation it is probably true, at least in terms of the human cost. Poverty is the condition of lacking basic human needs such as nutrition, clean water, health care, clothing, and shelter because of the inability to afford them. There are several levels of poverty from an individual to national level and earthquake disasters impact at all levels. The 2010 Haiti earthquake struck in the most densely populated area of the country, As More than 78% per cent of Haitian residents live in poverty and Haiti is the poorest country in the Western Hemisphere the buildings in Port-Au-Prince and other areas of Haiti were in very poor condition in general and were not designed or constructed to be earthquake resistant.

The primary earthquake hazard directly responsible for mortality is surface seismic waves which cause ground shaking. This poses a huge hazard as buildings and other structures collapse, killing or injuring their occupants. This was the case in Sichuan, China in 2008 where severe ground shaking was the direct cause of death, injury and the catastrophic destruction of hospitals, roads and other infrastructure. An estimated 5.4 million buildings collapsed and a further 21 million were damaged. In poorer areas such as rural China, buildings are compromised despite strict regulations due to poor quality construction work and corruption meaning the correct materials is not used. Since 1976 China has had a stringent earthquake building code. Before the quake, millions of buildings in Sichuan pre-dated the 1976 code. These older buildings were mainly low-rise masonry constructions without steel reinforcement. Without it, buildings are brittle and easily snap and collapse. In Sichuan, building failure was due to a combination of severe ground shaking, poor design lacking in steel reinforcement and the use of inadequate construction material, including inferior concrete. The reason behind such high figures was due to poor design and cost-cutting construction. Concentrated mainly in poorer rural areas, these buildings were the most vulnerable and simply collapsed in the quake, this was also the same situation for the 2010 Haiti Earthquake. The earthquake caused a massive devastation impact as the city is built on loose sediments. The depth of the earthquake in Haiti was very shallow, meaning that the energy that was released is very close to the surface, which causes some violent ground shaking. How individuals and the emergency services react during and immediately after such hazards can play a big role in reducing the death toll.

Secondary hazards can prove just as fatal and include landslides and soil liquefaction. The result of liquefaction is that building foundations become unstable and slopes become vulnerable to mass movement. As people living in poverty cannot afford the materials to build homes with high quality foundations and many live in squatter settlements or slums they are particularly vulnerable. The location of buildings is often determined by the funds available when planning takes place. In LEDCs where there is civil strife governments are more open to corruption and allow building on areas of land that are unsuitable. Slums often develop on land that is unsuitable for building due to ground composition or an unsafe location such as at the base of steep slopes, putting people living in poverty in further danger. In rural areas in developing countries, poverty may contribute to the isolation of communities as roads and electronic communications are disrupted. Landslides can result from earth movement and in the Sichuan Mountains the quake triggered mass movement and slope failure. The town of Beichuan was partly buried by landslides. Landslides also blocked access roads, further slowing down an already struggling rescue effort. Whereas MEDCs often have all the equipment and technology necessary to move large boulders and search through rubble the images we see on TV of the poor scrabbling through collapsed buildings with their bare hands show us what those in LEDCs must resort to.

National poverty limits the amount of aid survivors and refugees have access to, and the existence of disaster planning. In terms of modifying the loss LEDCs are heavily reliant on international aid, making them more vulnerable as aid rarely arrives straight away and lack of clean water and medication means disease can spread easily in the aftermath, killing many. However even in Kobe only 7% of people were covered by earthquake insurance, which is extremely expensive in Japan. As those covered are unlikely to be the poorer members of the community who lost their homes, poverty is once again the real killer. Citizen groups in Kobe claim that there have been a further 2900 deaths from suicide or neglect as poverty at an individual level means that following the disaster people without food and shelter have few entitlements to fall back on. In contrast, the impact of Haiti Earthquake, Responses were slow to reach Haiti, because of the large aftershocks. Roads became blocked and ports and airports were damaged. Roads were blocked with road debris or the surfaces broken. The main road linking Port-au-Prince with Jacmel remained blocked ten days after the earthquake, hampering delivery of aid to Jacmel. Local people have had to use their bare hands to try and dig people out of the rubble.  International Aid such as Oxfam based in Haiti due to frequent natural disaster happened. Oxfam is providing support to 1.2 million people in Haiti through our earthquake response and cholera prevention programmes. This shows how LEDC are heavily reliant on international aid, in order to reinstate the area after a natural disaster happened.

Affluent nations put a lot of time and money into preparing their people and in Japan much is done to prepare for inevitable earthquakes. All schoolchildren are put through emergency earthquake and fire drills four times a year. People are informed about the danger associated and how to respond should they find themselves in an earthquake. The emergency services practice their response procedures and supplies of food, water, medicines and shelter are stored in recognised safe areas and earthquake kits can be bought in department stores or made up at home so that essential items are easily accessible when needed. Community preparedness depends very much on financial backing to make sure that everyone is aware and the issue stays in the spotlight through TV campaigns and other media. Poverty creates problems in educating people about the best ways to respond to disasters, the people of Sichuan were extremely vulnerable to earthquake hazards. Vulnerability concerns preparedness and the human response to the hazard. Before the earthquake the mountainous areas of Sichuan were characterised by poor healthcare facilities; poor preparation meant that many of these healthcare centres were destroyed leaving few facilities to care for the victims.

The view that poverty is the real killer when it comes to an earthquake disaster can be argued due to the lack of money to invest in preparedness, materials and education programmes in LEDCs but is also because, in a society facing daily struggles for survival of a much more mundane nature, earthquakes are often perceived as infrequent problems unlikely to affect the current population and what little money there is, is spent elsewhere.

This is a good answer to a question which many students would find challenging. The author has introduced many of the key ideas, although the way this has been done could be improved upon. Some of the key concepts could have been explained in the introduction, which would have improved the structure overall. As this question is about deaths from disasters, the author should have used more figures for death tolls in the answer.