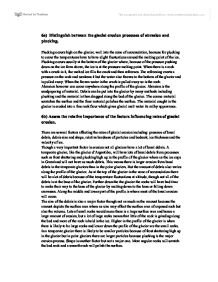 Distinguish between abrasion and plucking

6a) Distinguish between the glacial erosion processes of abrasion and plucking. Plucking occurs high on the glacier, well into the zone of accumulation, because for plucking to occur the temperatures have to have slight fluctuations around the melting point of the ice. Plucking occurs usually at the bottom of the glacier where, because of the pressure pushing down on the ice from above, the ice is at the pressure melting point. When there is a rock with a crack in it, the melted ice fills the crack and then refreezes. The refreezing exerts a pressure on the rock and weakens it but the water also freezes to the bottom of the glacier and is pulled away. When the frozen water in the crack is pulled away so is the rock. Abrasion however can occur anywhere along the profile of the glacier. Abrasion is the sandpapering of material. Debris can be put into the glacier by many methods including plucking and the material is then dragged along the bed of the glacier. ...read more.

But the amount of debris also varies along the profile of the glacier. As at the top of the glacier in the zone of accumulation there will be alot of debris because of the temperature fluctuations at altitude, though not all of the debris is at the base of the glacier. Further down the the glacier the rocks will have had time to make their way to the base of the glacier by melting down to the base or falling down crevasses. Along the middle and lower part of the profile is where most of the basal erosion will occur. The size of the debris is also a major factor though not as much as the amount because the amount depicts the surface area where as size may affect the surface area of exposed rock but also the volume. Lots of small rocks would mean there is a large surface area and hence a large amount of erosion, but a lot of large rocks means that little of the rock is grinding along the bed and more of the rock is held in the ice. ...read more.

This means the ice moves more and there is more abrasion and a better chance of plucking as well. This happens in the temperate climate, such as the glacier d'Argenti�ne which moves at 250m yr-1 and is 100m thick abraded a marble plate up to 36 mm yr-1. A polar glacier however, Breidamerkurj�kull in Iceland, abraded a marble plate at only 3 mm yr-1 when it was moving at 9.6 m yr-1, however it is only 40m thick. If Breidamerkurj�kull were to accelerate to 15.4 m yr-1 then the rate of erosion increased up to 3.75 mm yr-1. This means that velocity plays a bigger part than the thickness of the ice. In conclusion the all aspects are important to the rates of glacial erosion, but the most important are the velocity of the ice and the hardness of the particles in relation to the bed rock. The amount of the debris is not as important and the size and shape are the least important factors in the rate of erosion. ?? ?? ?? ?? ...read more.