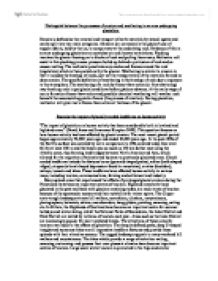 Distinguish between the processes of erosion and weathering in an area undergoing glaciation.

Distinguish between the processes of erosion and weathering in an area undergoing glaciation. Erosion is defined as the removal and transport of earth materials by natural agents and can be split into two main categories. Abrasion (or corrasion) is the glacier's use of angular debris, held by the ice, to scrape away at the underlying rock. Evidence of this in an area undergoing glaciation are scratches on rock known as striations. Plucking involves the glacier freezing on to blocks of rock and pulling them away. Meltwater will assist in this plucking process: pressure builds up behind a protrusion of rock and so causes melting. The meltwater penetrates any cracks and freezes around the rock (regelation) which is then pulled out by the glacier. Weathering is similar to erosion in that it includes the breakup of rocks, just not the transportation of the materials formed as does erosion. The specific definition of weathering is the breakup of rock due to exposure to the atmosphere. The weathering of a rock by freeze-thaw action (or frost shattering) may break up rock in periglacial conditions before glaciers advance. At the early stage of corrie formation freeze-thaw action and possibly chemical weathering will weather rock beneath the accumulating patch of snow (the process of nivation). ...read more.

In many upland areas, glacial breaches and troughs often form the only routeways suitable for communication by land. This situation is exemplified in the Highlands of Scotland where communications links by land north, and west of the Glen More are extremely difficult. Much of the land surface lies over 1000 metres above sea level, and consists of rugged mountains with steep, precipitous slope and badly drained moorlands. The presence of numerous lochs and fjords, hemmed in between high mountains, has effectively prevented any significant north-south routes being developed, even along the coast. Glacial breaches across the major watersheds form the only realistic routeways. Only two railway lines traverse the region -from Dingwall to Kyle of Lochalsh via Glen Carron and from Fort William to Mallaig via Lochs Eil and Ailort. All of the road links between Glen More and the west coast rely on glacial breaches which connect westwards and eastwards facing troughs. Glaciated highlands with high snowfalls present hazards such as avalanches. As the pressure of development increases, as in skiing areas, the impact of avalanches on people and settlements becomes greater. They are caused when the snow pack is destabilised suddenly by a loss of cohesion between naturally forming layers in the snow. ...read more.

Water which is used for HEP is not wasted, it then carries on down the valley. If the valleys are dammed, and the shape of the glacial troughs makes this very straightforward, then the water can be collected and sent to cities in areas of the country where there is perhaps not as much rain as in the highland areas. Glaciers impact human activity here by provide drinking water direct in some areas: rivers like the Rhine and Rhone are fed from glaciers. There is a fear that they may dry up if global warming melts the Alpine glaciers. People in La Paz, Bolivia have water from nearby glacier as public supply. People in the Rhone valley channel glacial meltwater to irrigate their crops. Llyn Peris is a moraine dammed overdeepened ribbon lake, and provides water for Llanberis in N. Wales. Lake Vyrnwy in mid Wales occupies a glacial trough which was flooded in 1889 by building a dam across the valley. Glacially eroded landforms affect human activity both positively and negatively. Avalanches expose inhabitants of the area to great risk, however, they still choose to live there. The positives include tourism, an industry which at present day is thriving and the attractions of these areas owe much to the effects of glaciation. HEP power provides areas with renewable energy and areas with drinking water and natural routeways are provided by glacial erosion. ...read more.