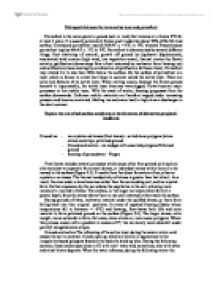 Distinguish between the terms active layer and permafrost Permafrost is the name given to ground (soil or rock) that remains at or below 0�C for at least 2 years. It is usually perennially frozen and it underlies about 20% of Earth's land surface. Continuous permafrost implies MAAT c. <-6oC to -8oC whereas Discontinuous permafrost implies MAAT c. -1oC to -8oC. Permafrost is characterised by several different things; frost shattering of material, growth off ground ice (upheaval displacement), accelerated wind erosion (high wind, low vegetation cover), thermal erosion by fluvial activity, gelifluction (down-slope flow of soil saturated by meltwater from thawing ice) and solifluction (mass wasting by combination of gelifluction & freeze-thaw). Permafrost may extend 1m to less than 400m below the surface. On the surface of permafrost is a layer which is frozon in winter but thaws in summer called the active layer. There are some key features of an active layer. When melting occurs, because the frozen ground beneath is impermeable, the active layer becomes waterlogged. Flows become major processes in this mobile layer. With the onset of winter, freezing progresses from the surface downwards. Unfrozen mobile materials are therefore trapped under increasing pressure and become contorted. Melting ice and snow lead to high stream discharges in the short summer. Explain the role of sub-surface conditions in the formation of distinctive periglacial landforms Ground ice - ice crystals and lenses (frost-heave) - sorted stone polygons (stone circles and strips: patterned ground - Ground contraction - ice wedges with unsorted polygons:Patterned ground - freezing of ...read more.

Defintion: any area with a tundra climate, such as mountainous areas in mid-latitudes, or where frost processes are active or permafrost occurs in some form. The high Cairngorms is an alpine-arctic environment in which frost-related processes operate effectively. Two generations of periglacial features may be recognised, features active today or earlier in the Holocene and relict features from the Pleistocene Active features are found both on the plateau and in the valleys. Due to the effects of erosion by the last ice sheet, relict features are confined to the Cairngorm plateau. Hummocks * ?origin, climatic conditions, vegetation enhancement * not nec. permafrost Tundra polygons * occur in seasonally frozen, non-continuous & continuous permafrost MAAT -12 - -20oC * Depends on matrix : Sands & gravels MAAT < -6oC, Soil MAAT < +1oC - < -1oC Patterned ground: MAAT <0OC - -2OC * stone sorting -frost heave & ice formation, wind ?permafrost * large-scale sorted patterns, e.g. polygonal ground ?permafrost MAAT <0oC to -2oC Methodology * Map extent of features * Date feature - directly? or indirectly (age of adjacent material) * Reconstruct spatial & temporal distribution Physical problems 1. Earlier evidence liable to be destroyed or v. modified by later glaciations 2. Glacier reoccupation 3. Subsequent modification/reworking by, e.g. periglacial processes 4. Outer margins of ice sheets beyond present-day land limit, i.e. submerged 5. Ice marginal features may not have been formed or have been eroded after glaciation 6. ...read more.

This is very similar in appearance to a small cliff, up to 5m high. It extends up valley, and may present a "tongue" layout in plan view. (c) Study Figure 9. Suggest reasons for both the increased depth of the active layer and the ground level subsidence after the clearance of the vegetation. [4] As the vegetation is cleared, the shade it provided from the insolation is removed. Thus the sunlight can act on the active layer for a greater period of time. This melts more of the active layer, and the resulting warmth reaches lower in to the soil. Since the active layer was previously super saturated, on draining it will lose 10% of its volume through reduction to water, and a further 25% as the excess drains away. This explains the 5 m ground level subsidence apparent from the diagram. The increase in active layer is due to the increased solar penetration which thaws more upper permafrost, creating a larger active layer, by approximately 25 m. PERMAFROST Permafrost produces distinctive periglacial landforms. Tundra is the 'classic' periglacial environment. The study of these features is called geocryology. May be continuous (permanent), or discontinuous (seasonal), and extend 1m to >400m below the surface. The upper active layer near the surface thaws during summer, and produces distinctive thermokarst features. Frost weathering, frost wedging, gelifluction, and solifluction are common processes. Patterned ground, frost polygons are common landforms. Permafrost is a very significant fact of life in the Northern Hemisphere: - 50% of Canada - 50% of Russia - 80% of Alaska are underlain by permafrost. This causes considerable engineering difficulties. ...read more.