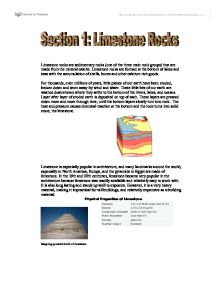 Limestone rocks are sedimentary rocks (one of the three main rock groups) that are made from the mineral calcite. Limestone rocks are formed at the bottom of lakes and seas with the accumulation of shells, bones and other calcium rich goods. For thousands, even millions of years, little pieces of our earth have been eroded, broken down and worn away by wind and water. These little bits of our earth are washed downstream where they settle to the bottom of the rivers, lakes, and oceans. Layer after layer of eroded earth is deposited on top of each. These layers are pressed down more and more through time, until the bottom layers slowly turn into rock. The heat and pressure causes chemical reaction at the bottom and the rock turns into solid stone, the limestone. Limestone is especially popular in architecture, and many landmarks around the world, especially in North America, Europe, and the pyramids in Egypt are made of limestone. In the 19th and 20th centuries, limestone became very popular in the architecture because limestone was readily available and relatively easy to work with. ...read more.

Limestone landscape The River Dove is named after the old English word dubo meaning 'dark'. It rises on the gritstone moors of Axe Edge between Buxton and Leek, and flows south through Beresford Dale, Wolfscote Dale and Milldale before reaching the gorge of Dovedale. It meets the Manifold just east of Thorpe village, some 8km north of Ashbourne; and from there it meanders through farmland to its confluence with the River Trent at Burton-on-Trent in Staffordshire. The power of the river to erode and transport material is dependent on the volume of water and its rate of flow. Erosion occurs far more slowly now than it did several thousand years ago when the glaciers were melting. However, in the winter, when rain and snow are frequent, the river floods its banks and washes away soil and rocks, fences and footpaths, often causing extensive damage. However, this action by the river does create a dynamic river valley, with where the river is not contained, shingle spits, eddies, islands and pools being created. This form of river creates habitats favorable to invertebrates and the water birds that depend on them, such as the Dipper. ...read more.

2.To reduce the number of visits made by car - in all parts of the Park, efforts are being made to encourage greater use of public transport with extra bus services and special routes serving popular honey pot areas. 3. To achieve a more even spread of visits over the year - the tourism market is very seasonal and many places are overcrowded in the summer and very quiet in winter. 4. To increase the number of staying visitors (who stay one or more nights) - as they spend more money and so help support the many small businesses which depend on tourism. 5. Keep the park clean by placing more bins. The graph on the next page shows that most people who visit Dovedale never wander further than the Thorpe Cloud and the Stepping-stones. This is because most people drop out there because the distance from the car park to park is far so many people with health problems get tired. Many people are likely more interested in the stepping stones and the outlook from the Thorpe Cloud. Dovedale from the slopes of Thorpe Cloud The Stepping Stones from the slopes of Thorpe Cloud G.C.S.E. Geographical Investigation Landforms, Processes and Tourism in a River Valley : Dovedale, Derbyshire. ...read more.