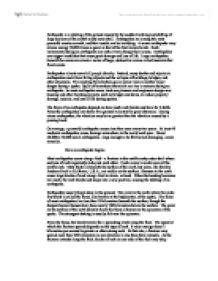 Earthquake is a shaking of the ground caused by the sudden breaking and shifting of large sections of the earth's rocky outer shell.

Earthquake is a shaking of the ground caused by the sudden breaking and shifting of large sections of the earth's rocky outer shell. Earthquakes are among the most powerful events on earth, and their results can be terrifying. A severe earthquake may release energy 10,000 times as great as that of the first atomic bomb. Rock movements during an earthquake can make rivers change their course. Earthquakes can trigger landslides that cause great damage and loss of life. Large earthquakes beneath the ocean can create a series of huge, destructive waves called tsunamis that flood coasts. Earthquakes almost never kill people directly. Instead, many deaths and injuries in earthquakes result from falling objects and the collapse of buildings, bridges, and other structures. Fire resulting from broken gas or power lines is another major danger during a quake. Spills of hazardous chemicals are also a concern during an earthquake. In most earthquake zones, land-use planners and engineers design new housing and other building projects, such as bridges and dams, to reduce property damage, injuries, and loss of life during quakes. The force of an earthquake depends on how much rock breaks and how far it shifts. Powerful earthquakes can shake firm ground violently for great distances. During minor earthquakes, the vibration may be no greater than the vibration caused by a passing truck. On average, a powerful earthquake occurs less than once every two years. At least 40 moderate earthquakes cause damage somewhere in the world each year. About 40,000 to 50,000 small earthquakes--large enough to be felt but not damaging--occur annually. How an earthquake begins Most earthquakes occur along a fault--a fracture in the earth's rocky outer shell where sections of rock repeatedly slide past each other. Faults occur in weak areas of the earth's rock. Most faults lie beneath the surface of the earth, but some, like the San Andreas Fault in California, U.S.A., are visible on the surface. ...read more.

Other hazards during an earthquake include spills of toxic chemicals and falling objects, such as tree limbs, bricks, and glass. Sewage lines may break, and sewage may seep into water supplies. Drinking of such impure water may cause cholera, typhoid, dysentery, and other serious diseases. Loss of power, communication, and transportation after an earthquake may hamper rescue teams and ambulances, increasing deaths and injuries. In addition, businesses and government offices may lose records and supplies, slowing recovery from the disaster. Reducing earthquake damage. In areas where earthquakes are likely, knowing where to build and how to build can help reduce injury, loss of life, and property damage during a quake. Knowing what to do when a quake strikes can also help prevent injuries and deaths. Where to build. Earth scientists try to identify areas that would likely suffer great damage during an earthquake. They develop maps that show fault zones, flood plains (areas that get flooded), areas subject to landslides or to soil liquefaction, and the sites of past earthquakes. From these maps, land-use planners develop zoning restrictions that can help prevent construction of unsafe structures in earthquake-prone areas. How to build. Engineers have developed a number of ways to build earthquake-resistant structures. Their techniques range from extremely simple to fairly complex. For small- to medium-sized buildings, the simpler reinforcement techniques include bolting buildings to their foundations and providing support walls called shear walls. Shear walls, made of reinforced concrete (concrete with steel rods or bars embedded in it), help strengthen the structure and help resist rocking forces. Shear walls in the centre of a building, often around a lift shaft or stairwell, form what is called a shear core. Walls may also be reinforced with diagonal steel beams in a technique called cross-bracing. Builders also protect medium-sized buildings with devices that act like shock absorbers between the building and its foundation. These devices, called base isolators, are usually bearings made of alternate layers of steel and an elastic material, such as synthetic rubber. ...read more.

Richter. This scale, commonly known as the Richter scale, measures the ground motion caused by an earthquake. Everyincrease of one number in magnitude means the energy release of the quake is 32 times greater. For example, an earthquake of magnitude 7.0 releases 32 times as much energy as an earthquake measuring 6.0. An earthquake with a magnitude of less than 2.0 is so slight that usually only a seismometer can detect it. A quake greater than 7.0 may destroy many buildings. There are about 10 times as many quakes for every decrease in Richter magnitude by one unit. For example, there are 10 times as many earthquakes with magnitude 6.0 as there are with magnitude 7.0. See RICHTER MAGNITUDE. Although large earthquakes are customarily reported on the Richter scale, scientists prefer to describe earthquakes greater than 7.0 on the moment magnitude scale. The moment magnitude scale measures the total energy released in an earthquake, and it describes large earthquakes more accurately than does the Richter scale. The largest earthquake ever recorded on the moment magnitude scale measured 9.5. It was an interplate earthquake that occurred along the Pacific coast of Chile in South America in 1960. The largest intraplate earthquakes known struck in central Asia and in the Indian Ocean in 1905, 1920, and 1957. These earthquakes had moment magnitudes between about 8.0 and 8.3. Scientists locate earthquakes by measuring the time it takes body waves to arrive at seismographs in a minimum of three locations. From these wave arrival times, seismologists can calculate the distance of an earthquake from each seismograph. Once they know an earthquake's distance from three locations, they can find the quake's focus at the centre of those three locations. Predicting earthquakes. Scientists can make fairly accurate long-term predictions of where earthquakes will occur. They know, for example, that about 80 per cent of the world's major earthquakes happen along a belt encircling the Pacific Ocean. This belt is sometimes called the Ring of Fire because it has many volcanoes, earthquakes, and other geologic activity. Scientists are working to make accurate forecasts on when earthquakes will strike. ...read more.