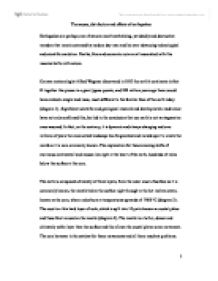 Earthquakes are perhaps one of natures most breathtaking, yet deadly and destructive wonders.

Earthquakes are perhaps one of natures most breathtaking, yet deadly and destructive wonders that remain untamed by modern day man and his ever advancing technological and scientific evolution. Deaths, fires and economic ruin are all associated with this massive battle with nature. German meteorologist Alfred Wegener discovered in 1912 the earth's continents in fact fit together like pieces in a giant jigsaw puzzle, and 200 million years ago there would have existed a single land mass, much different to the familiar face of the earth today (diagram 1) . Significant scientific and geological research and developments made since have not only confirmed this, but led to the conclusion that our earth is not as stagnant as once assumed. In fact, on the contrary, it is dynamic and always changing and over millions of years the once united landscape has fragmented and moved apart to create the world as it is now commonly known. The explanation for these amazing shifts of enormous continental land masses lies right at the heart of the earth, hundreds of miles below the surface at the core. ...read more.

The high death toll in Gujarat has since been identified by the Government of India partly as a result of 'sharp practices' in the building trade, shortcuts taken, corners cut and ultimately lives lost. Many hapless others were simply crushed to death under their makeshift wooden or tin homes, unable to afford 'proper' accommodation and stood no chance against one of natures super powers. No water was available for weeks after and heating, lighting and medical help was also of scarce supply. Shockingly and most frustratingly, for the aid workers that had arrived, it wasn't the lack of help that was the problem but in fact there was such an influx of volunteers that they had no direction, organisation nor a plan to adhere to; "The tragedy is not that there is no one to help, it is the opposite," the Times of India reported. "Relief is coming in a tidal wave, rescue missions have arrived from across the globe but there is no direction to these efforts." Another report in the Guardian newspaper in Britain reported of another problem typical in countries with a distinct lack of government plans. ...read more.

Lack of cohesion, no immediate action and time wasted and lives lost as they pondered over what they should do. The World Bank issued them with emergency funding some two months after the disaster, by then people were sleeping without a roof for weeks, even months. This all despite two earthquakes of over 6.0 on the Richter scale in the previous four years, yet no plan was ever made in the event of a repeat. Earthquakes are an inevitable part of life in some parts of the world and many countries, mainly in the developed world have put resources and finances towards strengthening buildings and creating action plans and this approach should be echoed across all earthquake prone areas no matter how small the threat, but as shown recently in Turkey the economically less well off nations face a struggle to find the money for such plans. Even the public vetoed an 'earthquake tax' which the Turkish government tried to impose, yet it is they who will complain that no help arrived if another strikes soon. In general large earthquakes will always bring about a loss of life but many can be saved by a carefully thought through plan and so question facing governments and their electorate all over the world is how much do they value the human life?. ...read more.