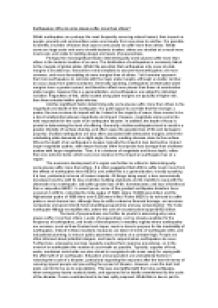 Earthquakes: Why do some places suffer more than others?

﻿Earthquakes: Why do some places suffer more than others? Whilst earthquakes are perhaps the most frequently occurring natural hazard, their impact on people, property and communities varies enormously from one place to another. It is possible to identify a number of factors that cause some places to suffer more than others. Whilst some are large scale and are to do with tectonic location, others are decided at a much more local scale, and relate to building design and levels of preparedness. Perhaps the most significant factor determining why some places suffer more than others is the tectonic location of an area. The distribution of earthquakes is commonly linked to the margins of global plates. Whilst the assertion that earthquakes only occur at plate margins is broadly true, it would be overly simplistic to assume that earthquakes are more common, and more devastating at some margins than at others. Yet it remains apparent that most earthquakes do coincide with the major plate margins, although a smaller number do occur away from plate boundaries. Generally speaking, earthquakes at destructive plate margins have a greater spread, and therefore affect more places than those at constructive plate margins, however this is a generalization, and earthquakes are subject to individual variation. ...read more.

People are often informed about potential dangers, and how to respond when earthquakes do occur. Furthermore, emergency services regularly practice their response procedures, so in the event of an earthquake the reaction is as smooth as possible. Typically, supplies of food, water, medicines and shelter are also stored in recognised safe areas ready for coping with the aftermath of an earthquake. Education and preparation are undoubtedly factors in reducing the scale of a disaster, particularly regarding the response after the event in terms of rescuing injured people and preventing the spread of disease. However, even the best laid plans can fail to live up to expectations. This was exemplified with the Kobe earthquake, when emergency teams reacted slowly, and appeared to be totally overwhelmed by the scale of the disaster. Poorer countries tend to be less aptly prepared. Whilst this is due in part to the lack of money to invest in materials and educational programmes, it is also because earthquakes are often perceived as infrequent problems in a society facing daily struggles for survival of a much more mundane nature. The geology of an area is further decisive in the ultimate significance a quake will have. ...read more.

In poorer parts of the world building design is often inadequate and, although building standards might be officially in place, regulations are rarely enforced. This was certainly the case in Mexico City, when in 1985 several modern high-rise buildings collapsed as concrete crumbled and thin steel cables tore apart. Conclusively, the impact of earthquakes on human activity varies significantly across the world. This is partly because the events themselves are unevenly distributed, both in terms of their geographical location and their magnitude, but also because people and societies have reached different levels of preparedness, in terms of building design and construction, and in their ability to educate people and respond after an earthquake event. Two earthquakes of a similar magnitude might be expected to have similar effects on human activity, but this is often not the case. Perhaps more than anything else, it is the ability of a country to respond to earthquake vulnerability that determines the likely impact, and there can be no doubt that the economic development factor is paramount in this respect. Whilst there can be no doubt that tremendously powerful earthquakes will cause destruction wherever they occur, it does seem to be the case that, all things being equal, LEDCs tend to suffer more than MEDCs. ...read more.