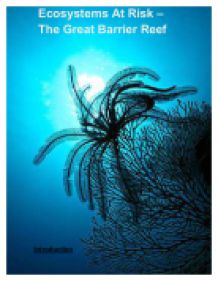 Introduction Charles Darwin, an evolutionary scientists/naturalist, discovered the theory of evolution; in particular, survival of the fittest. This concept can be applied to the modern world and its ecosystems at risk. The human population is regarded as the 'fittest'; however those ecosystems at risk are at the opposite end of the chain. The Great Barrier Reef is an ecosystem at risk. Climate change, overfishing and increased tourism are threats to the reef both past and present. But what threats lie in the future? With an increasing population, spikes in oil demand and rising carbon dioxide (CO2) levels; extreme strain is being put on the organisms inhabiting the reef. Charles Darwin was the engine room behind the theory of 'survival of the fittest'; but what if the fittest were to help those at risk? The Great Barrier Reef The Great Barrier Reef is a not only a vast, complex community of corals, but a natural wonder in itself. Distinct from any other ecosystem, the biodiversity sampled on the reef is like no other ecosystem in the whole world. According to marine biologist Robin Aiello, "There are more different species of animals and plants in a cubic meter of the Great Barrier Reef, than in any other environment in the world, including tropical rainforests." ...read more.

Tropical Cyclones In 2006, a category five cyclone (cyclone Larry) ripped through The Great Barrier reef just north of Cairns. As a path of destruction was left, corals were ripped from their communities leaving big, gaping holes where they used to reside (see Figure 1.5 below). There was an immediate imbalance in the reef and a decrease in the overall species in some areas decline. It was estimated that it would take up to 20 years for the reef to repair itself and overcome the damage made. However; this cyclone came just after a spike in the sea temperatures on the reef and did save the reef from a major bleaching event. If you refer below to Figure 1.6, approximately 33.8% of all coral mortality over the past 16 years has been because of storms. This has been caused by a major deviation of the weather patterns due to climate change. Management Strategies There are many management strategies put in place to minimize the effect climate change has on the world. Many of the strategies you might be familiar with are: * Electric vehicles (see Figure 1.7 below) ...read more.

Further measures will be put in place as these issues progression gets sped up due to increased demand for fish and oil, and increasing fossil fuel usage. As mentioned before, the biodiversity is distinct from any other ecosystem in the world and this glorifies what a beautiful ecosystem it is. Glossary Biodiversity - The variety of species and the genetic variability among individuals within each species. Ecosystem - the dynamic complex of plant animal and micro-organism communities and their non-living environment as a functional unit. Extinction - The state or process of ceasing or causing something to cease to exist. G20 - (Group of 20) the largest 20 producing (economically) countries of the world determined by GDP. Greenhouse gas - A gas that contributes to the greenhouse effect by absorbing infrared radiation, e.g. carbon dioxide. Light Intensity - the quantity of visible light that is emitted in unit time per unit solid angle. Salinity - The level of salt dissolved in water. Species - All organisms of the same kind that are potentially capable of breeding and producing fertile offspring. Symbiotic Relationship - A relationship between two entities, which is mutually beneficial to both participants. Zooxanthellae - A symbiotic algae that lives with coral polyps and created the colours of the coral. ...read more.