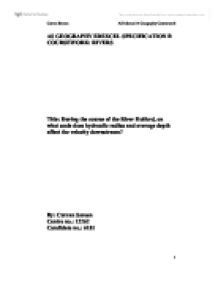 AS GEOGRAPHY EDEXCEL SPECIFICATION B COURSEWORK: RIVERS Title: During the course of the River Holford, on what scale does hydraulic radius and average depth affect the velocity downstream? By: Curran Sareen Centre no.: 12262 Candidate no.: 6181 Contents Introduction 3 Methodology 7 Data Representation, Analysis and Explanation 10 Evaluation and Conclusion 20 Bibliography 23 During the course of the River Holford, on what scale does hydraulic radius and depth affect the velocity downstream? Introduction The aim of this investigation is to assess the relationship between several river processes which include hydraulic radius, average depth and velocity and how this changes downstream in the River Holford. This will require an accurate collection of variables using different methods and the results can be compared to real-life examples such as the Bradshaw Model and basic theory. Location The River Holford, a relatively small river, is situated in the Quantock Hills in West Somerset, and is approximately 7.2km long. West Somerset Its source is located at Frog Hill and Lady's Fountain (Spring) within Holford Central Park which flows into a ford half a kilometre downstream from the source. It then flows past Woodlands Hill and the Combe Cottages 2 kilometres downstream. Half a kilometre further, it joins with another tributary (Hodder's Combe) before it flows through Holford, three kilometres from the source. For the next two kilometres it passes through a rather remote area of woodland and agricultural land until it passes Kilve, at which point, it is no longer in the National Park Boundary. The river emerges at Kilve beach and its mouths flows into the Bristol Channel. Sketch Map Theory - Bradshaw Model As I progress through this project I will continually refer to the Bradshaw Model in order to compare the patterns of the variables that I've been studying. The Bradshaw Model demonstrates how river characteristics change between the upper-course and lower-course of a river, which will be relevant to my project because I can analyse and determine compare how the informationvariables that I collected compare to this model. ...read more.

The antecedent conditions would obviously play a massive role in the variables studied due to the amount of water currently flowing in the river. Dependant on the weather and the time of year Working in small groups of three ensured that measurements were fairly judged and therefore reduced bias. As data was collected by a variety of different people, data that relied on semi-subjective views such as wetted perimeter could be biased. Opportunities for improvement Threats for improvement A longer period of time could be spent studying the River Holford so that there was a constant spacing between samples and sites. Time and money constraints would not allow us to spend more time studying further sites. More sites would require a lot of people. The problem of subjective views could be solved by allocating a group to collect such data which could be compared amongst the members. This would result in a lot of walking between sites for the group which would take a lot of time and effort. Students would be unwilling to do this. To overcome the influence of antecedent conditions, the river variables could have been recorded on a wet day and a dry day. The weather may be capricious and therefore it may take longer to collect results and students may not be prepared for lengthy collection of data. Throughout the investigation a large quantity of variables were studied and analysed which allowed many tests for linkages between some of these. Other avenues of enquiry could involve looking at vegetation interference with the river's bed and banks as many leaves and rotting branches were deposited around the river's channel. Also, the frequency of specific river features could have been mentioned to demonstrate real-life examples drawn from theory. Transportation and depositional problems could also have been brought into the investigation during the field trip. Overall, the investigation was completed to a satisfactory level with respectable results although some contradicted the models of a river's variables. It was completed on time and many students benefited from the experience and teachings. ...read more.